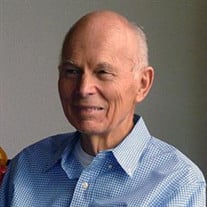 Joseph (Dean) Madsen was born October 7, 1932 on a farm in Blackfoot, Idaho, the oldest child of Donetta Jensen and Stanley Alexander Madsen. Dean started milking cows and shucking potatoes around age six, developing a work ethic he carried throughout his life. When Dean was twelve, his family moved from their farm in Blackfoot, eventually making their way to Richmond, California. Dean missed the farm and family that still lived in Blackfoot, and always considered himself a farm boy. When Dean was a senior in high school, he was asked by a friend for a ride to the nearby university to apply for college. Dean agreed and once there, decided to fill out an application himself. He was accepted and in 1950 began as a freshman at The University of California, Berkeley. He was an engineering major and tuition was free. Dean considered this serendipitous event one of the gifts of his life. Upon graduation, Dean served a mission for The Church of Jesus Christ of Latter-day Saints in the Northern States mission. After completing his mission, he served out his two year ROTC commitment in Nancy, France. Following his military service, Dean returned to U.C. Berkeley to pursue a Master’s Degree in Accounting. He also started dating a vivacious young woman named Helen Swan and they married in 1960. He remained her devoted husband for sixty years. The year following their marriage, Dean completed his Master’s Degree and began working as a Certified Public Accountant at Haskins and Sells in San Francisco. After 12 years in public accounting, he became the Chief Financial Officer for both public and private companies until his retirement. Daily walks, backpacking trips, reading, and long conversations with family and friends were among Dean’s favorite pastimes. Dean and Helen lived for fifty five years in Oakland, CA. where they raised their four children and developed close friendships with their congregation, the Oakland First Ward. Though Dean moved away from his Mormon beliefs, he remained close to his Mormon heritage. In 2008, Dean and Helen retired first to Las Vegas, Nevada, and then Salt Lake City. Dean passed away on April 10, 2020, (Good Friday) from complications from Alzheimer’s disease, an illness he endured with the grace in which he lived his life. Dean often liked to point out that he was born in the depths of the Great Depression and at the lowest point in Stock Market history. He marveled at how fortunate he was to live in an era of historic progress. Dean is survived by the love of his life, Helen, and his four children: Elisabeth Lee (Lisa) and husband, Casey Crellin, of Salt Lake City, Utah; Catherine Dawn (Cathy) and husband, Ray Carter, of Pittsburgh, Pennsylvania; Cynthia Kay (Cindy) and husband, Rory Reid, of Las Vegas, Nevada; and Peter (Ramsey) Madsen and wife, Elisabeth Klunker, of Park City, Utah; sixteen grandchildren and three great-grandchildren. Also surviving are his sister Diana Jensen of Las Vegas, Nevada and his brother, Stanley (Reid) Madsen of Lehi, Utah. He was preceded in death by a brother, Keith Alexander Madsen, on January 2, 1959, and a sister, Sandra Matilda Madsen, on June 20, 1949. Due to COVID-19 restrictions, a memorial service will be held in the summer of 2020 in the Bay Area. In lieu of flowers, please send a memory of Dean to Helen Madsen at 6898 S. 2300 E. #318, Cottonwood Heights, Utah, 84121, or consider a contribution to the Cleveland Clinic Lou Ruvo Center for Brain Health in Las Vegas, NV., where Dean was treated for his Alzheimer’s Disease. Condolences may be expressed at www.bergmortuary.com.

The family of Joseph Dean Madsen created this Life Tributes page to make it easy to share your memories.