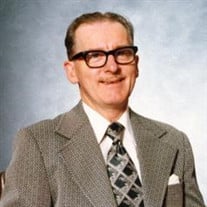 Joseph Gordon “Gordie” Thibault passed away on Sunday, September 29, 2019 at the age of 96. He was born July 28, 1923, the youngest child of Mary Irene McCarthy and Joseph Alphonse Pontaléon Thibault. He had three half-siblings: Thelma Norene (Roy Cahoon), “Tip” (Elmer James), and “Jack” (Junius) Ekelund; and two full brothers: Maurice Alphonse Thibault (Pierrette) and Douglas Edward Thibault (Frances). Gordon was born at home “on the homestead” near Twin Butte and Waterton Park, Alberta, Canada. He grew up in Quebec and New Brunswick, speaking both English and French, as his father was French Canadian. While living in Canada, Gordon had many jobs, including working for a mine, serving in the Canadian Army, helping many friends fix up their homes, working on temple improvement (Idaho Falls Temple), and even had his own TV show. He attended BYU, where he met his future wife, Alice Ann Hansen. Gordon and Ann were married on March 28, 1951 in the Cardston Alberta LDS Temple. They had four children: Gordon Maurice (deceased in 1962 at the age of 10), Esther Ann (Don Jensen), Milton Edward (Marilyn Billings), and Earl William (Debra Cohen). They lived in Canada until serving a mission to France in 1962 to build an LDS chapel in Nice, France. While there, Gordon also worked on the Brussells, Belgium chapel. In 1965, Gordon and his family moved to Provo, Utah, where he attended BYU again for a short time and worked at the BYU Motion Picture Studio as a set builder. He was even in a few of the BYU movies! Gordon later worked for LDS Church Communications and helped with displays for the South Visitor Center at Temple Square in Salt Lake City and for the Washington DC Temple Visitor’s Center. After leaving Church Communications, Gordon worked for Valtek in Springville before finally retiring and moving to St. George, Utah. Gordon and Ann were blessed to serve as LDS Temple ordinance workers while in St. George. In 2005, they moved back to Provo. Throughout his life, Gordon served faithfully as a member of The Church of Jesus Christ of Latter-day Saints. As well as serving as a temple ordinance worker, he served as Elder’s Quorum President, a Seventy, and Bishop of both Provo and BYU wards. He helped many people, not only with their homes, but in any way he could. He was very friendly and outgoing, and loved to joke and tease. He was a great example to all of us. He is survived by his daughter and two younger sons, 13 of 14 grandchildren, and 21 great-grandchildren. He is greatly loved and will be missed by all who knew him. Funeral services will be held at 1:00 p.m., Friday, October 4, 2019 at the LDS Meetinghouse at 1090 West 1020 South, Provo, Utah. The family will receive friends from 11:30 a.m. to 12:45 p.m. prior to services. Interment, Provo City Cemetery. Condolences may be expressed at www.bergmortuary.com.

Joseph Gordon &#8220;Gordie&#8221; Thibault passed away on Sunday, September 29, 2019 at the age of 96. He was born July 28, 1923, the youngest child of Mary Irene McCarthy and Joseph Alphonse Pontaléon Thibault. He had three half-siblings:... View Obituary & Service Information

The family of Joseph Gordon "Gordie" Thibault created this Life Tributes page to make it easy to share your memories.

Send flowers to the Thibault family.