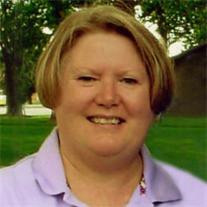 Josephine Mathews Atkinson Bass 1950 - 2012 Josephine Mathews Atkinson Bass, beloved sister, aunt, wife, mother, and grandmother passed away on March 15, 2012 after a brief battle with cancer. Josephine, or Jo as she was affectionately called, was born on January 30, 1950 to John Archibald and Harriet Harris Mathews Atkinson in Soda Springs, Idaho. Jo grew up in Gilroy and San Jose, California. After graduating from Leigh High School in 1969, she served an LDS mission in Vancouver/British Columbia, Canada. After her mission, Jo attended Ricks College in Idaho and Brigham Young University in Utah. In August of 1975, her former mission companion Colleen Moser and husband Fred set Jo up on a blind date at a Lawrence Welk concert at the Salt Palace. That night she met her best friend and the love of her life, Clayborne Bass. They were married on September 5, 1975 in the Salt Lake Temple. Jo and Clay moved to Hollister, California in 1976 and raised their three boys there. Jo spent her employment in the customer service industry. She worked for K&S Market in Hollister for 15 years and then Wal-Mart and Costco. Jo loved the simple things in life. Her family and her faith were the two most important factors to her. She was a loving and generous individual. The highlight of Jo's life was to see her three sons married and sealed to their spouses in the Salt Lake Temple. Jo was a devout member of The Church of Jesus Christ of Latter-day Saints. She was serving as secretary in the Relief Society presidency at the time of her passing. She enjoyed serving others. Jo is survived by her devoted companion Clay and her three sons: Jaron (Amy), and children: Darren, Samantha, Jake, Ryan, and Colin; Glen Mathew (Elizabeth), and children: Evalina and Simon; and Adam (Amber), and children: Makayla, Savannah, and Brianna. She is also survived by her sister, Pam (Warner) Pereira, and brother Matt (Suzie), and their families. Jo was anticipating the birth of two additional grandsons to be born in the next month and a half, making a total of twelve grandchildren for her and Clay. She was preceded in death by her parents, and nephew Jake Atkinson. Funeral services will be held at 11:00 a.m., Saturday, March 24, 2012 at the Spring Creek 14th Ward Chapel, 672 North 250 West, Springville, Utah. Friends may call one hour prior to services. Interment, Santaquin City Cemetery. In lieu of flowers, please consider donating to the Temple Patron Assistance Fund, part of LDS Philanthropies (http://www.ldsphilanthropies.org) Mom, we love you, miss you, and look forward to the day when we will be reunited with you again.

The family of Josephine Atkinson Bass created this Life Tributes page to make it easy to share your memories.