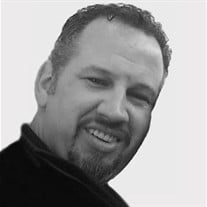 Joshua Von Holdaway, 42, passed away Friday, February 12, 2016 after a long battle with drug and alcohol addiction. Joshua was born May 22, 1973, in Provo, Utah to Dennis Frank and Carol Dexter Holdaway. He grew up in Orem and later graduated from Orem High School. He served a faithful LDS mission to the Charlotte, North Carolina Mission. It was there that he met his future wife, Karen Shelton. Together they had 3 children. They later divorced. He then married Jennifer Millett and they had a daughter together. They later divorced. Joshua always loved to figure out how things worked. From a young age, he would take apart anything he could get his hands on which helped him later on in life when he became an amazing mechanic. He also spent many years as a guard at the Utah State Prison. Toward the end of this life, he worked at Traco Manufacturing. He loved the company and the people he worked with. Joshua made friends everywhere he went because he was the kind of guy that would do anything for anyone. Despite his struggles, Joshua’s testimony of the Gospel of Jesus Christ never wavered. Joshua leaves behind his four children: Hannah (Reyvin) Siegel, Taylor, Blake, and EmmaGrace; mother, Carol; brothers, Paul (Alyson), Robert (Jacki), and Seth (Melissa); many aunts, uncles, cousins, nieces, nephews, and friends and his dog Laverne. He was preceded in death by his father, Dennis Frank Holdaway and cousin, Michael Fackrell. Funeral services will be held at 11:00 a.m., Friday, February 19, 2016 at the Cascade 7th Ward Chapel, 400 East 400 North, Orem, Utah. Friends may call at the Berg Mortuary of Orem, 500 North State Street, Thursday, from 6-8:00 p.m. and at the church Friday, from 10-10:45 a.m. prior to services. Interment will be at the Orem City Cemetery. Condolences may be extended to the family at www.bergmortuary.com. Should friends desire, contributions to Joshua’s memorial fund can be made online at gofundme.com/dbsk4fzg

Joshua Von Holdaway, 42, passed away Friday, February 12, 2016 after a long battle with drug and alcohol addiction. Joshua was born May 22, 1973, in Provo, Utah to Dennis Frank and Carol Dexter Holdaway. He grew up in Orem and later graduated... View Obituary & Service Information

The family of Joshua Von Holdaway created this Life Tributes page to make it easy to share your memories.

Send flowers to the Holdaway family.