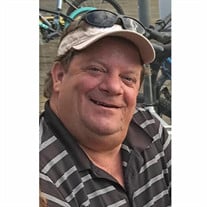 With tears of sadness, we bid a loving farewell to Joshua L. Turner who entered this life November 8, 1959 and left quietly in the early morning hours on February 27, 2022. We have no doubt he was welcomed “home” by his mom, Marilyn Turner, and dad, Lance Turner, who preceded Joshua in death. Josh leaves behind his son Kaleb and daughter Torrey Turner, his dear ex-wife Tonia (his true friend to the end), his big sister Heidi Bailey (Wayne), and brothers Chip (Tracy) and Matt (Suzy) and many nieces, nephews and great nieces and nephews. He connected with his birth mother Margaret, a few years ago with whom he developed a sweet relationship. Josh was loyal to his many friends. We are grateful to Chris Jenkins who remained a true and lifelong friend through thick and thin. Josh was a good employee because he worked hard. He loved hiking, biking, golfing, skiing and swimming. He loved being outdoors. He created unique pieces of jewelry, using natural stone and was able to sell and share many of his creations. It was incredibly frustrating to Josh as his hands became less and less cooperative. Josh had an appreciation and an eye for good art. He was a good art critic for Dad. He loved most eras of history. He read about them and enjoyed watching historical documentaries. He loved music from the 70's, particularly the Grateful Dead. He had a sizable collection of CDs. Josh loved good food and was quite the connoisseur. When he was a little boy, Josh loved bottled cherries and whenever he would get a quart from our Grandma Fish, he could make it last for a couple of weeks. A few cherries in a bowl each morning that he would methodically nibble around the "stones" until every bit of cherry was eaten. He loved things to be clean and orderly. At age 12, Josh broke his neck while body surfing. Initially it was believed he would be paralyzed from the neck down. It is to be considered nothing short of miraculous that Josh was spared and able to do the things he loved for as long as he did. He was determined to do and create, in spite of his advancing physical limitations. We have no doubt Joshua was grateful to be free of his earthly “frame” that had steadily failed him over the past twelve years. Those who knew Josh well are certain he is relieved to finally be pain free. Josh was the recipient of heavenly interventions in his 62 years of life. We have hope that as Josh took that next step on his eternal journey that he at last recognized how many blessings he had and that his Heavenly Father was always mindful of him. A graveside service for Josh's family members will be held Saturday, March 12, 2022 at the Midway Cemetery. There will be a celebration of Josh’s life on Saturday March 12, 2022 at 12:30 p.m., for friends and family who would like to attend at the home of Chip Turner, 1071 Valley View Road, Daniel (Heber), Utah. Feel free to wear a favorite piece of tie dye clothing and to share a favorite memory of Josh. Condolences may be expressed to the family at www.bergmortuary.com.

With tears of sadness, we bid a loving farewell to Joshua L. Turner who entered this life November 8, 1959 and left quietly in the early morning hours on February 27, 2022. We have no doubt he was welcomed &#8220;home&#8221; by his mom, Marilyn... View Obituary & Service Information

The family of Joshua L. Turner created this Life Tributes page to make it easy to share your memories.

With tears of sadness, we bid a loving farewell to Joshua L....

Send flowers to the Turner family.