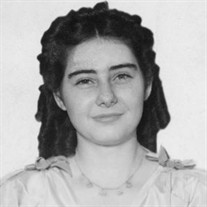 Joyce Taylor Brimhall, age 89, passed away peacefully June 17, 2014 in Orem, Utah. She was born February 14, 1925 in Provo, Utah to Jesse Powell and Dora Curtis Taylor. Married Ray Hanna (divorced), then Wendell Brimhall in the Provo Temple. She is survived by her daughter, Kaye Charlene Hollenbeck (Jacob); grandchildren, Lex and Mitch Hollenbeck and seven great-grandchildren all from Alaska; cousin, Judith Ann Johnson; sister-in-law, Rosaleen DeGering; nieces and nephews, Dora Judson(Phil), Jesse Taylor (Robin), Faye Boyle (Jon), Karen Wangsness (Roger) and Tamara Moore (William); step-children, Sue Frandsen, Evelyn Kofford, Dan, Mike and Sydney Brimhall. Preceded in death by parents; sister, ElDene Taylor; brother, Curtis Taylor; uncle and aunt, Verl and Roene Johnson and nephew, Kenneth Johnson (Claire). Joyce also had a still-born daughter. Joyce worked at Dixon Taylor Russell before her marriage. She was a member of the LDS Church. She served as a visiting teacher, taught Relief Society and Primary, and served as a young women's leader. She has been a member of the DUP for 23 years. She was loved by all. Special thanks to the Orchard Park Rehab. Graveside services will be held at 9:00 a.m., Friday, June 20, 2014 at the Provo City Cemetery, 610 South State Street, Provo, Utah. There will be no prior visitation. Family and friends are invited to meet at the cemetery. Condolences may be sent online at www.bergmortuary.com.

The family of Joyce Taylor Brimhall created this Life Tributes page to make it easy to share your memories.

Send flowers to the Brimhall family.