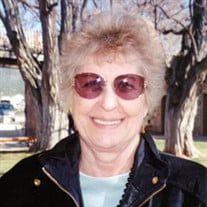 Joyce Hansen Gordon passed away peacefully at home of natural causes on April 15, 2022. She was 85 years old. Joyce was the last surviving child of her family. She was born on February 19, 1937, in Baker City, Oregon, along with her twin sister, Janice. Her parents were Ralph L. Hansen and Zella Herring Hansen. Joyce and Janice joined 3 older siblings, Venna, Arlen, and Lauritz. Joyce lived in Halfway, Oregon until the age of 10, when her father passed away. Zella and the girls moved to Provo, Utah about a year later, but Joyce and Janice would go back to Halfway during the summers and stay with their older sister Venna and her family. She was a life-long member of The Church of Jesus Christ of Latter-day Saints. When Joyce was in high school, she met Mark Kerby while she was working at a drug store in Provo. They were married in November 1953, and had 6 children, 3 boys and 3 girls. They lived in Provo until 1967, when they purchased a home in south Orem. They were married for 16 years and the divorced. In early 1971, Joyce started dating Ken Wright of Orem. The two were married June 1971 and, with that marriage, she became stepmother to 6 more children (5 boys and 1 girl), Gordon, Allen, Deloy, Bret, Bart, and Marie Teressa. In February 1994, Ken was diagnosed with colon cancer. He underwent chemotherapy that summer and in October of that year they moved to Washington, Utah to be nearer to her twin sister Janice, her brother Arlen, her son Rick, and their spouses. Ken passed away November 6, 1994. Joyce decided to stay in Washington and got a job with the Forrest Service there. Joyce married Douglas Gordon from Provo in March 2000. With that marriage, 5 more grown stepchildren were added to her ever-growing and changing family, along with many more grandchildren, and eventually great-grandchildren. She has 23 grandchildren, 40 great-grandchildren and many more grandchildren and great-grandchildren by marriage, who she loved dearly and without hesitation. Doug and Joyce resided in the St. George/Hurricane, Utah area until October 2021, when they moved to Springville to live with family. Doug preceded Joyce in death, passing away on December 6, 2021. Joyce continued to stay with family until her passing on April 15, 2022. Joyce is survived by her children, Lynne Ann (Bill) Richards (Orem), Mark Kerby (Pleasant Grove), Kathy Schoenwald (Wenatchee, Washington), and Jana Lee Peay (Kanab); her stepchildren, Allen (Lynnette) Wright (Orem), Marie Teressa (Gus) Babalis (Salt Lake), Dwayne (Mary) Gordon (Provo), Dell (Keri) Gordon (Springville), Janiel (Leonard) Jones (Provo), Darin (Lisa) Gordon (Provo), and Jodee (Ken) Blue (Lehi); as well as many grandchildren and great-grandchildren. She was preceded in death by her husbands, Ken Wright and Doug Gordon; sons, Brian Kerby and Ricky Kerby; 2 brothers, 2 sisters, 3 grandchildren, and 4 stepchildren. Funeral services will be held at 11:00 a.m., Monday, April 25, 2022 at the Hobble Creek 7th Ward Chapel, 1965 East Canyon Road, Springville, Utah. Friends may visit with the family from 10-10:45 a.m. prior to services. Interment, Orem City Cemetery. Condolences may be expressed to the family at www.bergmortuary.com. Those who cannot attend in person are invited to view a live stream of the services via Zoom, https://zoom.us/j/98893595106?pwd=UC9FRG5ZZmt1d0pzcFR6N3AzWGEydz09. Passcode: 323072

Joyce Hansen Gordon passed away peacefully at home of natural causes on April 15, 2022. She was 85 years old. Joyce was the last surviving child of her family. She was born on February 19, 1937, in Baker City, Oregon, along with her twin sister,... View Obituary & Service Information

The family of Joyce Hansen Gordon created this Life Tributes page to make it easy to share your memories.

Joyce Hansen Gordon passed away peacefully at home of natural...

Send flowers to the Gordon family.