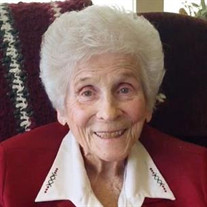 Joyce Holmes Henderson passed away peacefully in Highland, UT, on Saturday, August 5, 2017. She is now in the joyful reunion that she so anticipated with her beloved husband, Hubert Teamon Henderson; her parents, Joseph Mark Holmes and Gwen Stephens; and her son, Mark Henderson, who preceded her to the next life. She is survived by her four children, Brent, Stephen, and Greg Henderson, and Jeralee Renshaw; siblings, Dorothy McCombs Stubbs, Peggy Bunting, Dixie, J Mark, and Richard Holmes, Janet Barrus and John and David Holmes; and sister in-law, Delores Brooksby. She leaves behind the legacy of 23 grandchildren and 45 great grandchildren. Born in 1929 in Montpelier, ID, she moved very often as her father took new assignments for the USGS during the depression years. At the age of 8, her world was shattered when her mother died during childbirth. This experience, supported by the faith of her father, led to a deep and lifelong faith in her Savior and the plan of salvation. As the oldest of three sisters, she was forced to take upon herself many new family responsibilities. She met Teamon, in Kanab, UT, when he returned from serving in the Navy in WWII. They married in the St George Temple in 1946. Two months after the marriage, Bert was called to the Eastern States mission, leaving her behind for a season until she joined him a year later in Philadelphia. Bert and Joyce raised their family in Walnut Creek, CA, where she taught seminary, served as Stake Relief Society President, and served in the Cambodian Branch. Joyce graduated from Cal State Hayward. She became a sought after public speaker that was able to touch audiences in memorable talks that she would always deliver in a dramatic fashion without notes. She gained notoriety as one of the “moped mammas,” a group of middle aged housewives who would venture out on moped adventures. She owned a Diet Center in Danville, CA, for 13 years. In later years she was a prolific scrap-booker, documenting the activities and growth of her extended family. Joyce had a cheerful optimism and unwavering faith that touched the lives of all who were blessed to come in contact with her. Her deep love for others, her teaching stories, and her strength will be sorely missed by all who knew her. Funeral services will be held at 12:00 noon, Thursday, August 10, 2017 at the Canyon View Chapel, 10494 North 4720 West, Highland, Utah. Friends may call from 10-11:30 a.m. prior to services. Interment will be at 12 noon on Monday, August 14 at the Oakmont Memorial Park, Lafayette, CA. Condolences may be expressed at www.bergmortuary.com.

Joyce Holmes Henderson passed away peacefully in Highland, UT, on Saturday, August 5, 2017. She is now in the joyful reunion that she so anticipated with her beloved husband, Hubert Teamon Henderson; her parents, Joseph Mark Holmes and Gwen... View Obituary & Service Information

The family of Joyce Holmes Henderson created this Life Tributes page to make it easy to share your memories.

Send flowers to the Henderson family.