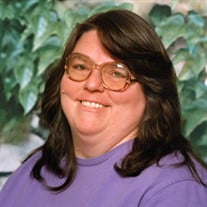 Joyce has returned to her father in heaven and all her loved ones who passed before her, including her father, Arnold Johnson, her mother Helen Johnson, and her friend, Rhonda Mathews. She will be greatly missed by everyone who had the privilege to be a part of her life and enjoy her contagious smile and beautiful personality. Joyce was the youngest of two daughters born to Arnold and Helen Johnson in Ely, Nevada on October 7, 1957. Her older sister, Linda Seeley, was nine years older than her and was someone she always looked up to and aspired to be like. As a child, she enjoyed music and learning and always excelled in school. She had excellent grades and participated in numerous clubs. She was part of the golf club, chess club, science club, and Spanish club. She graduated as the valedictorian of her class and was selected to travel to Germany to represent her band and school. Her childhood days were spent fishing, camping, swimming, and traveling. The family made several memorable trips to Yellowstone National Park where Joyce and Linda would accompany one another while enjoying the outdoors. Many times, Linda would get assigned to babysit Joyce. Linda and her girlfriends would take Joyce in the car with them and if they saw cute boys, they would make Joyce hide in the backseat so they could look cool and attractive. Joyce chose to join The Church of Jesus Christ of Latter-day Saints as a teenager on her own. She was the only person in her household to be a member of The Church of Jesus Christ of Latter-day Saints so she had to attend church and grow her faith on her own. She chose to attend early morning seminary before school, which did not count towards her school credits. She would regularly wake up at 4:30 am to walk to seminary and often this was in the wintery cold weather of Ely, Nevada. Joyce felt attending seminary was important so she could grow her faith and become closer to her heavenly father. Anyone who knows Joyce, knows she is not a morning person, so getting up that early was not easy and definitely not for a teenager. After leaving high school, Joyce was offered several college scholarships for her academic achievements. She elected to leave the small town of Ely, Nevada to attend Idaho State University in Pocatello, Idaho, on an academic scholarship. She aspired to be a pharmacist, which was why she chose Idaho State University. While in Pocatello, Idaho, Joyce met the love of her life, Stephen Glenn, at an LDS church dance. They eventually married each other in the Idaho Falls Temple and began a family in 1979 when she gave birth to their daughter, Kristie. Joyce was extremely excited to start a family and to be a mother. She was a natural mother and had a heart of gold. Later, she gave birth to their son, Rich. She always said she wanted to have twelve kids. She eventually got her wish when she had ten grandchildren and two children; although Joyce would say she wanted twelve children of her own. Joyce loved and cherished the friendships she had. She would always try to include Rhonda, Debra, and all their children with everything the family was doing. She was known for collecting music boxes and became accustomed to being called “JK” since it was short for Joyce Kay. Joyce loved her family and extended family very much and was always thinking of others. Joyce spent several nights crafting projects for others and even crocheting. Joyce crocheted blankets, mittens, beanies, barbie doll clothes, and many other items. Joyce loved her children and her pets and would do anything to make them safe and happy. She had a way of touching people’s lives and leaving a memorable experience with everyone she came in contact with. Several times, customers who had contact with her when she was working as a cashier would say they only shopped at that store to see her. After her divorce from Stephen, she moved with her children to Orem, Utah where she would call home the rest of her life. She made it a point to never miss a sports game or activity for her children and could always be heard cheering louder than everyone else in the stands. Joyce accepted everyone and treated them with non-judgmental love. This made it easy for others to feel like she was their second mom, which numerous people felt, including Weston McColl, Jake Stites, Tyler Dabling, Cristopher (CJ) Powers, Jamie Andrews, Tracy Furgoli, Mandy Peterson, Bridgette McDonald, Virl Andrews, and many others. Every family member respects and feels a debt of gratitude for Joyce’s life, fully consecrated to family, faith, and love. Joyce, we will always have our hands held high with the “love you” sign and a big smile on our faces to remember you forever. Joyce was preceded in death by her parents, Arnold Spencer Johnson and Helen Leora Jolly Johnson. She is survived by her late husband, Stephen Kenneth Glenn; two children and their spouses, Rich and Tracy (Smith) Glenn, Kristie (Glenn) and Wayne Jorgenson; and her ten grandchildren, Kaylee, Shawntay, Tabitha, Eric, Bradley, and Lori Jorgenson and Marcus, Dallas, Makai, and Danika Glenn. A funeral service will be held in her honor at 2:00 p.m., Wednesday, November 17, 2021, in the Berg Drawing Room Chapel, 185 East Center Street, Provo, Utah. A viewing will be held just prior to the funeral at the same location from 12:30-1:45 p.m. Joyce will be buried in the Timpanogos Memorial Gardens Cemetery in Orem, Utah. Condolences may be expressed to the family at www.bergmortuary.com.

Joyce has returned to her father in heaven and all her loved ones who passed before her, including her father, Arnold Johnson, her mother Helen Johnson, and her friend, Rhonda Mathews. She will be greatly missed by everyone who had the privilege... View Obituary & Service Information

The family of Joyce Kay "JK" Johnson Glenn created this Life Tributes page to make it easy to share your memories.

Joyce has returned to her father in heaven and all her loved...

Send flowers to the Glenn family.