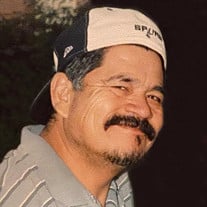 A giant has fallen. Though it pains everyone he’s ever known, on December 19, 2020, while in the arms of his love and surrounded by his children, our big guy left us after suffering a devastating cerebral stroke in the early morning hours. We are heartbroken. Juan Manuel Ruiz Sr. was born October 15, 1952 in Viesca, Coahuila, Mexico to Cipriana Bernal Mata and Luis Ruiz Rocha Sr. His family moved from Mexico to Elberta, Utah when he was 14. He attended Payson High School. In 1972, he enlisted in the United States Army. During his enlistment, he experienced friendships, hardships and an even deeper love of being an American. On November 1, 1975, he married the love of his life, Mary Corrales, at St. Francis Catholic Church in Provo, Utah. They made their house a welcoming home and raised their family in Provo. Juan was a devout member of St. Francis of Assisi Catholic Church. Even though making it to Mass these days wasn’t existent, he always believed that prayer will get you through anything. Juan was a very hard worker. He worked at Geneva Steel for a few years until he started his career at Provo City Sanitation. He worked both full time jobs until the closing of Geneva Steel. Provo City locals knew him as a friendly garbage man from 1981 - 2008. He enjoyed working until he sadly had to retire 1 year early for health reasons. Dialysis, a hemorrhagic stroke, a kidney transplant, the death of a son, and prostate cancer were crushing blows, but he still kept his heart and soul strong enough to push on for his family. Juan’s dancing shoes were always on and ready for a good song. He loved fishing and looked forward to being well enough to try it again someday, where so many of his favorite memories have been made. He was a fierce lover of all kinds of music and loved to fill the space with a good movie. It’s no wonder why we are a movie quoting family. Juan, the most accepting and whole hearted man you’d ever meet. With a beautiful smile and quick witted joke, meeting him once was enough to leave an everlasting impression. He is survived by his beautiful wife, Mary. His children: Teresa (Chris), Juan Jr. (Joey), Mandi (Matt). Grandchildren: Aliya (Carlos), Terence (Yahaira), Ryo, Hayden, Jaelyn, Jaxton, Kadin, Braxton and Jace. Great-grandchildren: Thor, Luna, Sunny and Cassius. Siblings: Pancha (Leon), Luis (Licha), Petra (Antonio), Felipe (Concha), Chuy (Virginia), Tony (Pee Wee). Brother-in-law: Ben (Marcia). Countless nephews, nieces, godchildren and beloved pup, his “hita”: Chloee. He is preceded in death by his parents: Luis and Cipriana Ruiz. In-laws: Joe and Cleo Corrales. Brother: Manuel, sister: Zapopan, brother-in-law: Freddie. And the one he’s missed the most, his son: Jose Andres Ruiz. Though his body had its fair share of imperfections, he fought back every single time. We’d like to thank every single medical provider and staff who helped care for him throughout this journey. His way of coping was cracking a good joke with each of them, whether they were ready for it or not. We genuinely appreciate their help with giving us more time with him. Juan was carried through life by love. Most people knew him as Juan or Mr. Ruiz, but the real lucky ones were blessed to call him Dad, Tio, Appa and Baba. His heart was so incredibly full with love and good friendships, but there was nothing he loved more than the family he built - his life’s purpose. To know him was to love him, but if you didn’t get the chance, oh man, you sure missed out. A Funeral Mass will be held at 11:00 a.m., Tuesday, December 29, 2020 at the St. Francis of Assisi Catholic Church, 65 East 500 North, Orem, Utah. Friends may call at the Berg Mortuary of Provo, 185 East Center Street, Monday, December 28, from 6-8:00 p.m. and at the church Tuesday from 10-10:50 a.m. prior to Mass. Interment will be in the Provo City Cemetery. For those attending, properly worn masks are required and social distancing will be practiced. Condolences may be expressed at www.bergmortuary.com. Join live stream from the meeting link: https://reverehealth.webex.com/reverehealth/j.php?MTID=m3b89fc7347064f5291e1560b776476dc Join live stream by meeting number: Meeting number (access code): 146 448 4934 Meeting password: hvB3Nqyay85

A giant has fallen. Though it pains everyone he&#8217;s ever known, on December 19, 2020, while in the arms of his love and surrounded by his children, our big guy left us after suffering a devastating cerebral stroke in the early morning hours. We... View Obituary & Service Information

The family of Juan Manuel Ruiz Sr. created this Life Tributes page to make it easy to share your memories.

A giant has fallen.

Though it pains everyone he’s ever known,...

Send flowers to the Ruiz family.