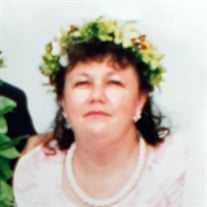 Judith “Judie” Elaine Singer (known in the family as Aunty Judie) passed away September 22, 2019. Judie was the second child born to Jack E. Singer and Juanita Henrietta Jung May 29, 1946 in Hermosa Beach, California. Her sister, Tomi Arleen Singer, is 2 years older. Their parents divorced when Judie was about 1 year old, and Juanita and her two daughters then moved to San Leandro, California to live with their grandparents. The family of 3 stayed at their grandparents home until Juanita was able to purchase a home in Oakland, California, not too far from their grandparents’ home, so Tomi and Judie could continue to be watched by Nana and Gramps while their mother was at work. Judie attended Roosevelt Elementary School by her grandparents’ home until the family moved to another home in San Lorenzo, California when Judie was in junior high. They remained in San Lorenzo until Judie was about 14, then the family moved to Seattle, Washington where Juanita had an offer of a better job. In Seattle, Judie made lots of friends and was in an all-girls marching club. They practiced and practiced and marched in parades and such. The family then moved back to San Leandro, where Judie graduated from San Leandro High School. Judie was a Junior Hostess at the USO (United Service Organization), sponsoring events for the Military. Judie then went to the University of Washington in Seattle for a year. She worked for several companies in the San Francisco Bay Area and then when she was around 21-22 she became a member of The Church of Jesus Christ of Latter-day Saints. After a couple of years, she served a full-time mission in the Cordoba Argentina Mission; she fulfilled an Honorary Mission. After her mission she attended Brigham Young University where she finished her BA in Computer Science. Judie liked to cook and entertain family and friends. While in Argentina she learned to make many Argentine deserts and main dishes, which she used to make for family and friends and they delighted everyone. She was a good cook, and everyone has fond memories of all of those family dinners and parties. After graduation, she worked for several different companies and then moved to Salt Lake City, Utah working as a programmer analyst. She eventually heard the “call of the north” and packed up her car and drove to Juneau, Alaska, where she worked as a programmer analyst for the State of Alaska in Juneau. Since Juneau was basically land locked with long winters and darkness, she decided to go to Mexico for a vacation. While in Mexico she went parasailing−which was definitely unlike anything that she had ever done before. Unfortunately her landing went poorly; she landed in only a few inches of water and badly damaged her right ankle, which required an operation and pins and rods which she had in her ankle the rest of her life. After, she decided to go to Hawaii for a visit. She had never had a desire to go to Hawaii but since her sister, Tomi, had lived there before and loved it, she went. Upon her return she called Tomi and asked her if she wanted to go to Hawaii for a visit and then said forget that, “How about we just move there?” Judie ended up moving to Hawaii and worked as a senior programmer analyst for The Queen’s Medical Center. Tomi and family soon followed and they both lived in Hawaii for many years. Later in life she moved back to the “mainland” to Midvale, Utah, where she purchased a home. She worked for The Church of Jesus Christ of Latter-day Saints in their accounting department. She also took care of her mother during that time until Juanita passed on. Judie served in many callings in the Church such as in the Primary and as the gospel doctrine teacher, but her favorite service was in the Nursery, in which she served for many years. She loved the little ones. She retired from The Church in 2013 and soon took on her own health challenges. Her health challenges necessitated her moving into various assisted living facilities in the Orem and Provo areas. She ended up at Ashford Assisted Living in 2018 and lived there until her passing on September 22, 2019. Judie, in her life, had many friends and extended family members who have much love and fond memories of her great cooking, fun parties, and much kindness. Judie achieved many wonderful things in her life and served those around her valiantly. She will be sincerely missed by her family. Judie is survived by her sister, Tomi Kaneshiro; nieces, Laura Cook, Nicole Halliday; nephew, Mike Labit, and many grandnieces and nephews, and friends. Memorial services will be held at 2:00 p.m., Monday, September 30, 2019 at the Berg Drawing Room Chapel, 185 East Center Street, Provo, Utah. Friends may visit with the family from 1-1:45 p.m. prior to services. Condolences may be expressed at www.bergmortuary.com.

The family of Judith "Judie" Elaine Singer created this Life Tributes page to make it easy to share your memories.

Send flowers to the Singer family.