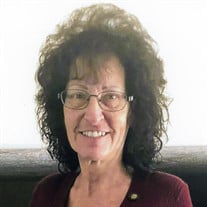 Judy Johnson Simpson was born May 11, 1966 to Minnie and Douglas A. Johnson. She died Friday, June 26, 2020 (54 years old). She lived in Provo all of her life. Her parents were always supportive of her efforts. After high school, she enrolled in a program teaching Dental Assisting. That was the start of her employment. Working hard for advancement, she was employed at Provo College as a manager and instructor of the dental assisting program. She worked for several years, loving the interaction with personnel and students. She had so many friends; the students called her "Momma Jude" because she was so caring. Judy had a cheerful personality and loved helping others. She worked several years with them and then transferred to AmeriTech College to set up a new dental assisting program in Provo. Due to physical problems over the years, she was unable to work for them long. Being out of the workforce was devastating to her because she loved working with the personnel and students. She married Eldon Ray Simpson in 1989. They had two children, Talissa and Jazlyn. Talissa is married to Kortland Turner and Jazlyn is still living at home. Her family meant everything to her and she made every effort to make it a loving home regardless of her health problems. Eldon and Judy made sure the girls got what they needed and Eldon was very supportive of Judy, all through hospital stays and bad health. Her mother, Minnie Johnson, felt it a pleasure to be her mother and grandmother to the girls. Judy was preceded in death by her father, a brother, and four grandparents. She is survived by her husband, two daughters, mother, sister, Vicky (Kenneth) Downing of Huntsville, Alabama; and brother, Wayne Johnson of Provo, Utah. Funeral services will be held at 11:00 a.m., Friday, July 3, 2020 at the Provo Sunset Stake Center, 1560 South 1100 West, Provo, Utah. Friends may call from 9:30-10:45 a.m. prior to services. Interment will be at the Provo City Cemetery. Condolences may be expressed at www.bergmortuary.com.

Judy Johnson Simpson was born May 11, 1966 to Minnie and Douglas A. Johnson. She died Friday, June 26, 2020 (54 years old). She lived in Provo all of her life. Her parents were always supportive of her efforts. After high school, she enrolled... View Obituary & Service Information

The family of Judy Johnson Simpson created this Life Tributes page to make it easy to share your memories.

Send flowers to the Simpson family.