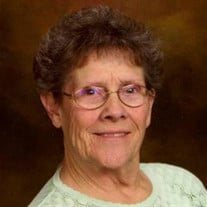 Julie Chlo Erickson Schweiss, 78, passed away Friday, April 5, 2019, in Provo, Utah, from heart complications. Julie was born May 13, 1940, to parents Matthew Thorgare Erickson and Mary Cilicia “Polly” Hill Erickson in Spanish Fork, Utah. She married John Robert Schweiss on November 6, 1965, in Spanish Fork, Utah. Their marriage was later solemnized in the Provo LDS Temple on November 6, 2013. Julie and John are the parents of six children, and were blessed to have celebrated 50 years of marriage in 2015, shortly before John’s passing. Julie was raised in Spanish Fork, Utah, the youngest of nine children, alongside four brothers, Fred, Cliff, Aaron, and Ray, and three sisters, Nancy, Thel, and Cleo (one brother, Eric, died at birth). They were all born in the family home, a small three bedroom house on a quarter acre farm. Growing up in a large family with meager resources, they learned the values of perseverance, hard work, frugality, and resourcefulness at a young age. Julie was extremely proud of her heritage, with English and Swedish roots on her mother’s side, and Icelandic roots on her father’s side. Julie was educated in Spanish Fork schools as a girl, graduating from Spanish Fork High School in 1959. After graduation, Julie worked various jobs, including as an industrial seamstress. She learned the skill of sewing with rapid industrial machines, working at piece rate. Those skills translated into a lifelong hobby of sewing clothing and quilts for her family and others. Julie later entered into the Dental Assistant Program at Utah Trade Technical Institute, graduating and working for dentists in Provo and Payson for several years. While attending the dental assisting program, she met John through a mutual friend, and they were married shortly after her graduation. In 1989, she became a licensed Therapeutic Recreational Specialist and began her 16-year career working with the residents at the Utah State Developmental Center. This job was truly a calling for her; she found immense joy and satisfaction from being able to contribute to the social and emotional well-being of the people whom she worked with. It was a rewarding career from which she retired in 2005. Julie was a hard worker and would persevere without complaint, in spite of any obstacles, qualities that she exhibited in all aspects of her life. She was always there for her family, no matter the circumstance and was an unfailing source of support. While never comfortable in the limelight, she did not have trouble sharing her opinion, and could get feisty if the need arose. She enjoyed a good chuckle over the silly things in life, crossword puzzles and Sudoku, handicrafts of any kind, including scrapbooking and sewing, and finding a great bargain. After her retirement, she immersed herself in those hobbies, and donated many baby quilts and slippers to the children’s ward of the Utah Valley Hospital. In 2015, Julie was diagnosed with Alzheimer’s disease. This diagnosis came within days of her husband, John's diagnosis of cancer, which rapidly took his life. Over the past four years, so many things changed for her, but she took it all in stride and simply adjusted without complaint, as was typical for her. After she moved into assisted living care, she still maintained an amazing amount of independence right up until the end. Over the last year, she lived at Ashford Assisted Living in Springville and received excellent care from some of the best in the business. They provided a wonderful environment, where respect for her dignity was paramount. We owe a debt of gratitude to the caregivers at Ashford for all of their kindness to both Julie and her family! Julie is survived by her children, Angela Jackson, John Correy Schweiss, Traci (David) Brown, Michelle Sterling, and Jerry (Jessley Porter) Schweiss; as well as four grandsons, six granddaughters, and her first great-grandson, born two weeks ago. She was eager and fortunate to meet him, in spite of it being from a hospital bed. Julie also leaves behind one sister, Nancy Tanner, Ogden, UT, and many nieces, nephews, cousins, in-laws, and friends, who loved her dearly. Julie was preceded in death by her husband, John Robert Schweiss; an infant daughter, Cilicia Marie Schweiss; her brothers, Eric Ronald Erickson, Matthew Carl Fred Erickson, Marion Clifford Erickson, Aaron Eldred Erickson, and Raymond Bernell Erickson; her sisters, Dorthella Loween Erickson LeBaron, and Cleo Joyce Erickson Hansen; and her parents, Matthew Thorgare Erickson and Mary Cilicia Hill Erickson. Funeral services will be held at 11:00 a.m., Friday, April 12, 2019 at the Sunset 10th Ward Chapel, 1402 South 570 West, Provo, Utah. Friends may call Thursday, April 11 at the Berg Mortuary of Provo, 185 East Center Street, from 6-8:00 p.m. and at the church Friday from 10-10:45 a.m. prior to services. Interment, Provo City Cemetery. Condolences may be sent to the family at www.bergmortuary.com. In lieu of flowers, the family would greatly appreciate donations to the Alzheimer's Association for research into the treatment and cure for this disease www.alz.org/donate.

The family of Julie Chlo Erickson Schweiss created this Life Tributes page to make it easy to share your memories.

Send flowers to the Schweiss family.