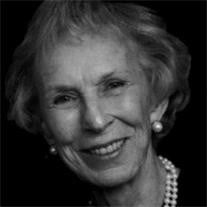 Our beloved mother, grandmother, and great-grandmother, June Elaine Carlson Fillmore, age 82, passed away peacefully October 8, 2011 in Provo, Utah. Born June 19, 1929 in Provo, Utah to Oscar Wilford Carlson and Hazel Agenta Meredith. Elaine grew up in Provo; she graduated from BY High School in 1947. Then attended BYU where she was affiliated with the Cougarettes. She worked as a stewardess with Frontier Airlines, and also worked for Marshal Fields in Chicago and Geneva Steel, in Vineyard Utah. In 1956, she married her loving husband, Charles Lamar Fillmore and was also baptized by him that year, into The Church of Jesus Christ of Latter-day Saints. She was a skilled homemaker and together they raised their family in the Oak Hills 1st Ward in Provo. They were later sealed together as a family for time and all eternity in the Provo LDS Temple. Elaine was a gracious woman; she loved her friends, neighbors and her family, especially her loving husband of 55 years. She enjoyed her association with others, through Church callings, the Relief Society, Riverside Ladies, bridge clubs, literary clubs, and other social groups. She will be missed. We are comforted to know she joins those that have gone on before and is in the arms of loved ones. She is preceded in death by her parents as well as her brothers, Bill and Bob and sister Beth. Elaine is survived by her husband, Charles, of Spanish Fork, along with her younger brother Fred, of Salt Lake City. Elaine is also survived by her six children: Sharlee (Bill) Vestal, Denver, CO; Charles David Fillmore, Honolulu, HI; Scott (Kim) Fillmore, Provo, UT; Lynn (Jeannie) Fillmore, Orem, UT; John (Debbie) Fillmore, Nephi, UT and Doug (Janna) Fillmore, Highland, UT; along with grandchildren, great-grandchildren and extended family. Many thanks to those who have offered compassionate service for Elaine these past months. Funeral services will be held at 11:00 a.m., Thursday, October 13, 2011 at the LDS Canyon Ward Chapel, 3477 East River Bottoms Road, Spanish Fork. Friends may call at the Berg Mortuary of Provo, 185 East Center Street, Wednesday evening from 6 until 8 and at the church Thursday from 9:30-10:45 a.m. prior to services. Interment, Payson City Cemetery. Condolences may be sent to the family through www.bergmortuary.com .

The family of June Carlson Fillmore created this Life Tributes page to make it easy to share your memories.