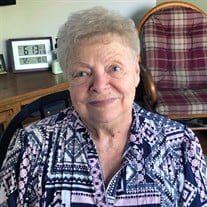 Karen Edwards Ward, beloved wife, mother, grandmother, and great-grandmother, returned to her heavenly father on December 22, 2020. Karen was born on December 22, 1938 in Provo, Utah, to Solen and Afton Edwards. Karen and her older brother, Lewis, enjoyed many happy memories growing up in Provo. Karen attended Provo High School, where she met the love of her life, Don Ward. They were married August 30, 1956. On her birthday in 1959, Don surprised Karen with the keys to their new home in Orem, where they would spend the next 59 years. She served in the Jr. Sunday School as pianist and primary teacher for several years but her favorite calling was the ward greeter for Sacrament services. She loved meeting people at the door; nobody passed by without the famous Karen Ward hug. She worked at JCPenny for 20 years as a hair stylist and retired in 2001. Don and Karen loved cars, and Karen had her own 1967 Camaro that she would take to the car shows with Don. She would love to tell everyone that her car had more trophies than Don’s car! Don and Karen were members of the Corvette Club of Utah and enjoyed many trips with the club in their 2007 Corvette. They had many fun adventures in their life but nothing meant more to them than their three children: Tamie, Vicki, and Brant. Karen loved people and she would not let anyone go without telling them she loved them; and more importantly giving them a huge hug! She loved her friends and she had so many that we could not begin to mention them all, but know that she loved everyone. She was preceded in death by her husband, Don; parents, Solen and Afton, and brother, Lewis. She will be missed by her daughters, Tamie Barnhurst (Blair), Vicki Graff (Chris), and son, Brant Ward. 11 grandchildren, 15 great-grandchildren and 6 great-great-grandchildren. Funeral services will be held at 11:00 a.m., Tuesday, December 29, 2020 at the Berg Orem Chapel, 500 North State Street, Orem, Utah. Two viewings will be held at the same location, Monday, December 28 from 6-8:00 p.m. and Tuesday from 9:30-10:45 a.m. prior to services. Interment will take place at the Eastlawn Memorial Hills Cemetery. Condolences may be expressed to the family at www.bergmortuary.com.

The family of Karen Edwards Ward created this Life Tributes page to make it easy to share your memories.