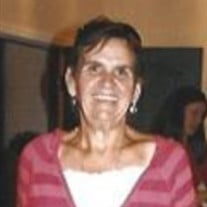 Karen Ann Wolf peacefully passed away on March 19, 2021, after suffering from early onset of dementia. She is survived by her son and daughter, Steven and Jessica; her younger sister, Janet; and her two grandchildren, Avery and Eloah. She was born to Ona Lee Nelson and Gerald Edward Wolf on November 7, 1952, at the Queen of Angels Hospital in Los Angeles, California. Karen was the oldest of three siblings. Many stories have been told that she did not take too kindly to her baby twin sisters when they were brought home just after her fourth birthday, but she loved them all the same. She came to be known as a strong-willed, resilient woman who cared deeply for those she cared about and loved. Her resilience and strong will would serve her well later in life. At the age of 33, she married and had two children, a boy and a girl. With her many imperfections, she raised her children to respect and love those around them. She did her best to instill in her children a love of reading and spent many long hours helping her children with their schoolwork during the school years and countless hours keeping them entertained during the hot summers in sunny Southern California. Many fond memories were created during family trips to Solvang, Catalina Island, and Disneyland. She loved Disneyland and its many attractions; especially It’s a Small World. Her marriage eventually came to an end due to poor choices made by her ex-husband. Due to this, she returned to the workforce after having been a stay-at-home mom for many years. To help her family through the difficult times that lie ahead, she relied on herself as well as the help of countless friends who became family. One of these family friends, who later became like a second daughter to her, invited her to attend church on a Sunday in January 2003. She was not a religious person, but she felt something different from what she had felt at other religious services. After a few weeks of lessons taught by missionaries of The Church of Jesus Christ of Latter-day Saints, answered prayers, and hearing the testimonies of others, she made the choice to be baptized on February 2, 2003. Her favorite story to tell about her conversion story to the Gospel of Jesus Christ was the fact she quit smoking cold turkey after having her two nearly full packets of cigarettes confiscated and torn to shreds in front of her. She loved the Gospel and loved sharing it with others whenever she could. A year after her baptism, she was endowed in the Los Angeles Temple. She always had a strong desire to be able to serve a mission later in life. Karen will always be remembered for her love of her Savior, infectious laugh, kind heart, generosity, and for better or for worse, her stubbornness. She will be loved and missed by her family and friends. Funeral services will be held at 11:00 a.m., Tuesday, March 23, 2021 at the Berg Orem Chapel, 500 North State Street, Orem, Utah. Friends may call from 10-10:45 a.m. prior to services. Interment will be in Timpanogos Memorial Gardens in Orem, Utah. Condolences may be expressed at www.bergmortuary.com.

Karen Ann Wolf peacefully passed away on March 19, 2021, after suffering from early onset of dementia. She is survived by her son and daughter, Steven and Jessica; her younger sister, Janet; and her two grandchildren, Avery and Eloah. She was... View Obituary & Service Information

The family of Karen Ann Wolf created this Life Tributes page to make it easy to share your memories.

Send flowers to the Wolf family.