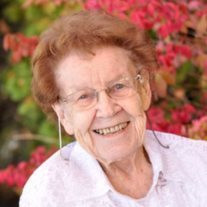 Karma Watson Startup died peacefully at the age of 91 on February 27, 2014. She arrived in this world on January 17, 1923, the third of seven children born to James Albert and Lola Meredith Olsen Watson in Spring City, UT. She married Harry Walter Startup Jr. on January 24, 1947 in the Manti Temple. They are the parents of three children: Kandy (Douglas) Hillam; Lola Dawn (Thayne) Wilson; and Jon (Stacey) Startup. Karma is survived by her children, 14 grandchildren, and 36 great-grandchildren, a sister, Fanon Cook, and a brother, Grant (Stella) Watson. She was preceded in death by her husband Harry, her parents, and siblings; Dawn, Wanda, Gwen, and Jack. Karma was raised in Spring City and graduated from North Sanpete High School. She moved to Provo after graduation and was employed first at the Provo Brick Yard then later at the Columbia Steel Ironton Plant. Karma met Harry Walter Startup in Provo on a blind date. They were eventually married and remained sweethearts for 61 years until Harry’s death in 2008. Karma and Harry owned and operated the Startup Candy Company. Together they “sweetened” many lives. Karma managed the Startup’s retail store for more than 25 years. Her customers almost never got away from her store without updates on her family, in addition to their chocolates or other coveted sweets. Karma loved her children and grandchildren and immersed herself in their lives. Attending her grandchildren’s recitals and sporting events was one of her passions. She also enjoyed spending time with her family and hosting family dinners, especially on the Fourth of July and Thanksgiving. Karma also looked forward each year to the annual Watson reunion that was held in her beloved mountains of Sanpete County. She was an active member of The Church of Jesus Christ of Latter-day Saints and served in numerous capacities, including Relief Society President at the State Hospital for several years. She gladly provided service wherever there was a need. Karma was active in the Women’s Division of the Provo/Orem Chamber of Commerce, serving as President in 1992. In addition, Harry and Karma were awarded the Senator Reed Smoot Citizens of the Year Award in 2008 by the Provo/Orem Chamber of Commerce in recognition of their lifetime service to the community. She has been living at Our House of Orem Assisted Living for the past year and a half. While there she made many friends. The family would like to thank the staff that helped care for her. We would also like to extend special thanks to Dena Hazel of Utah Home Health and Hospice for the love and assistance she provided. The family invites loved ones and friends to celebrate Karma’s 91 years with them at a service held at 2:00 p.m., Friday, March 7, 2014 at the Bonneville 2nd Ward Chapel, 1289 East 300 South, Provo, Utah. Friends may call at the Berg Mortuary of Provo, 185 East Center Street, Thursday, March 6, from 6-8:00 p.m. and at the church Friday from 12:30 p.m.-1:45 p.m. Interment will be in the Provo City Cemetery. Condolences may be sent online at www.bergmortuary.com. In lieu of flowers, the family invites you to donate to the General Mission Fund of The Church of Jesus Christ of Latter-day Saints.

Karma Watson Startup died peacefully at the age of 91 on February 27, 2014. She arrived in this world on January 17, 1923, the third of seven children born to James Albert and Lola Meredith Olsen Watson in Spring City, UT. She married Harry... View Obituary & Service Information

The family of Karma Watson Startup created this Life Tributes page to make it easy to share your memories.

Karma Watson Startup died peacefully at the age of 91 on February...

Send flowers to the Startup family.