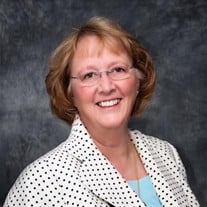 Karma Rae Carter Vela, our sweet mother, grandmother, sister, and friend passed away in her daughter’s home Monday, September 4 after a short battle with cancer. Karma was born and raised in Orem, Utah on February 8, 1942 to Ray and Helen Carter and graduated from Orem High School. Karma enjoyed her home in West Jordan and the many friends she had there. She was a member of the Church of Jesus Christ of Latter-day Saints and served faithfully in many Church callings including a mission to Independence, Missouri. She retired from Intermountain Healthcare/Cottonwood Hospital where she worked as a Phlebotomist in the Laboratory for many years. She enjoyed outings with her siblings, gardening, and quilting. She was preceded in death by parents, brother Stanley Carter and sister Colette Hedelius, and grandson Brock Barber. She is survived by siblings Carolyn (Jim) Miller, Glade (Diane) Carter, and a sister-in-law Susan Carter. Karma is also survived by her children Lonnie (Angela) Barber, Teri (Dan) Forbes, Michael (Jamie) Vela, and Maria (Todd) Christensen. She was blessed with 17 grandchildren and five great grandchildren. Funeral services in memory of Karma will be held at 11:00 a.m., Friday, September 8, 2017 at the Garden Cove Ward Chapel, 1945 West 9000 South, West Jordan, Utah. Friends may call at the church Thursday, September 7 from 6-8:00 p.m. and on Friday from 10-10:45 a.m. prior to services. Interment will follow at the Lehi City Cemetery. Condolences may be expressed at www.bergmortuary.com.

Karma Rae Carter Vela, our sweet mother, grandmother, sister, and friend passed away in her daughter&#8217;s home Monday, September 4 after a short battle with cancer. Karma was born and raised in Orem, Utah on February 8, 1942 to Ray and... View Obituary & Service Information

The family of Karma Rae Carter Vela created this Life Tributes page to make it easy to share your memories.

Send flowers to the Vela family.