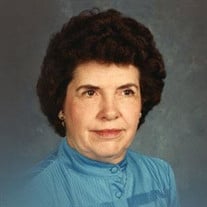 Kay Brown, age 97, passed away peacefully on May 24, 2017. The only child of Harry and Sophie Bennett, Kay was born January 24, 1920, in Jacksonville, Florida and grew up in Penns Grove, New Jersey. Mother focused her life on serving others through the YMCA, Girl Scouts, the GSO and other church and civic groups. Kay was engaged to John Charl Brown for three years while he served in the U.S. Army during World War II. Their marriage on May 11, 1946 was later solemnized in the Salt Lake Temple on June 25, 1959. Kay and Charl raised their family of three children in College Park, Maryland where they formed many strong and long lasting friendships. Mom and dad retired to Orem, Utah in 1980. Throughout her life, Kay enjoyed dancing, swimming, games, cooking and Lawrence Welk every Saturday night. Kay was gifted at making friends and bringing a smile to the faces of all around her. Kay was a faithful member of The Church of Jesus Christ of Latter-day Saints, serving as a Relief Society President, Young Women and Primary leader and numerous other callings. Kay and Charl served for five years as ordinance workers in the Washington D.C. Temple. Mother was preceded in death by her parents, her husband, two daughters-in-law, a grandson and a great-grandson. She is survived by two sons, Charles Brown (Laura-deceased, Lynn) of Foley, AL; Glen Brown (Kathy-deceased) of Layton, UT and daughter, Karen Evans (Randy) of Orem, UT along with 18 grandchildren and 43 great-grandchildren. The family wishes to extend special thanks for the compassionate care and service provided to their mother by so many. Funeral services will be held at 11:00 a.m., Tuesday, May 30, 2017 at the Stonewood 2nd Ward Chapel, 665 S. 200 W., Orem, Utah. A viewing will be held Monday, May 29 from 6:00-7:00 p.m. at Berg Mortuary, 185 E. Center St., Provo, UT and at the church on Tuesday morning from 9:00-10:30 a.m. Interment will be at the Provo City Cemetery. Online condolences may be sent through her obituary at www.bergmortuary.com.

Kay Brown, age 97, passed away peacefully on May 24, 2017. The only child of Harry and Sophie Bennett, Kay was born January 24, 1920, in Jacksonville, Florida and grew up in Penns Grove, New Jersey. Mother focused her life on serving others... View Obituary & Service Information

The family of Kathryn "Kay" Bennett Brown created this Life Tributes page to make it easy to share your memories.