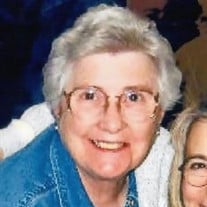 Kathryn Lewis (88) passed away in her home on August 15, 2021. She was born November 21, 1932 to Fay Ludlow and John Rowe Lewis in Benjamin, Utah, but grew up in Spanish Fork where she graduated from Spanish Fork High School. Kathryn attended Brigham Young University where she graduated in 1955 in Physical Education. She then began her teaching career at Springville High School. In 1957, she moved to Southern California where she taught in Torrance. During that time, she obtained a Master’s Degree in Physical Education from Long Beach State College. She was then appointed Assistant Professor of Education at San Diego State College. Kathryn was invited to return to BYU as an Associate Professor in 1972 where she obtained her doctorate in Professional Leadership Organizational Behavior in 1978. Her teaching focus was in Kinesiology, Bio-mechanics, and Human Anatomy. After 42 years of teaching, Kathryn retired having influenced the lives of hundreds if not thousands of students. She was recognized with great honors. Kathryn’s motto for life was that hard work is the key for success. She was meticulous in every effort she made. While in high school, Kathryn was the Girl’s Athletic Association president. While at BYU, Kathryn taught classes on coaching and she herself was the Women’s field hockey coach for five years. She also served as the Director of the Women’s Intramural program at the school. She was called by President Spencer W. Kimball to be the Regional Sports Camp Supervisor. Kathryn loved to play sports: tennis, golf, biking, and softball and she loved to watch sports: basketball, baseball, and especially football. Kathryn had endless hobbies where again considerable effort was placed. She loved photography, birdwatching, leather crafts, wood workings, playing cards, and watching old movies. Anything Kathryn saw someone do, she tried it herself. Kathryn was the champion hole digger and barn burner of her childhood. As an adult she continued to dig many holes always having the best garden of the neighborhood. Kathryn served in all auxiliaries of The Church of Jesus Christ of Latter-day Saints, but her greatest love was serving in Family History callings. She has written histories of ancestors and siblings, and of course, her own personal history. The family has been grateful for her countless effort and endless time in making these treasures. Kathryn is survived by ten nieces and nephews, whom she served as a second mother. They loved participating with her in all her wonderful interests. Kathryn was preceded in death by her parents and all her siblings: Ann Lewis Carter of Provo, John Ludlow Lewis of Spanish Fork, and Virginia Lewis Hall of Salt Lake City. We offer a special thank you to Doris Robinson who was a life-long friend. Doris cared diligently for all of Kathryn’s needs, especially over the last few years. Graveside services will be held at 10:00 a.m., Friday, August 20, 2021 at the Spanish Fork City Cemetery, 400 East 420 South, Spanish Fork, Utah. Friends may call at the Berg Mortuary of Provo, 185 East Center Street, Thursday, August 19 from 6-8:00 p.m. Condolences may be expressed to the family at www.bergmortuary.com.

Kathryn Lewis (88) passed away in her home on August 15, 2021. She was born November 21, 1932 to Fay Ludlow and John Rowe Lewis in Benjamin, Utah, but grew up in Spanish Fork where she graduated from Spanish Fork High School. Kathryn attended... View Obituary & Service Information

The family of Kathryn Lewis created this Life Tributes page to make it easy to share your memories.

Send flowers to the Lewis family.