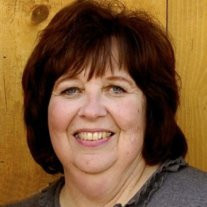 Kathy Jean Keske was born in the covenant in Pocatello, Idaho, to Vernal Junior Taysom and Nola Jean Evans Taysom. She enjoyed an idyllic childhood and youth growing up in Pocatello. While her father served as a bishop, one of her fondest memories was the opportunity to attend General Conference with him in Salt Lake City. The trip home was a melancholic experience, because Kathy loved General Conference and being with her father, and hated to see the weekend close. Kathy’s father was a certified jeweler/gemologist and master watchmaker, and Kathy worked in his store for many years as a sales clerk. As a baby, she and her parents travelled to St. Louis, Missouri, where her father received extensive training in his profession. Following graduation from high school in 1967, Kathy enrolled at Brigham Young University. At the same time, the family sold the jewelry store in Pocatello and moved to Cedar City, Utah, where a new jewelry business was opened. The first college graduate in her family, Kathy graduated with a degree in Family and Consumer Science (Home Economics) and, after much searching found her first teaching job at Grand Canyon Schools in Grand Canyon National Park, Arizona, where she stayed four years. In the fall of 1974, she met a young man by the name of Allen Keske, who was at the Grand Canyon for two months of training with the National Park Service. In 1975 Kathy left Grand Canyon and returned to school at Utah State University in Logan, Utah, where she earned a master’s degree in clothing design. This was followed by a year of teaching at Fredonia, Arizona, and then a move to Flagstaff, Arizona, in 1978, to continue her teaching career. In the late fall of 1979, she again met a young man by the name of Allen Keske, who by this time had transferred with the National Park Service from Denver to Grand Canyon National Park. Their first date was to the grand 75th anniversary celebration of the opening of the historic El Tovar Hotel in January of 1905. More dates followed, and Kathy and Allen were married in the Manti Utah Temple on January 7, 1981. Returning to Grand Canyon to live and work at Grand Canyon Schools again was a dream come true for Kathy. She had loved her first four years there, and always wondered if it would be possible to return. Besides, both her parents and Allen’s parents had honeymooned at the park following their weddings in 1947. Life at the park was wonderful! Many opportunities to serve in the small branch of the Church were enjoyed, as well as Stake callings. Teaching was fulfilling, but so was a 13-year break to raise her three children. Kathy’s children, Rachael Jean, Andrew Allen, and Emma Josephine, were all born and raised at the park, with Emma graduating last of all from high school in 2007. Kathy was so proud of her children, their integrity and dedication to Gospel standards, and their many personal and professional achievements. At Emma’s graduation, it was time for Kathy and Allen to retire and join the rest of the family in Utah, where all three children were living and going to college. Six wonderful years followed, close to city amenities and advantages Kathy had not enjoyed for many years. Although Kathy spent the last five months of her life in ill health, some of it hospitalized and some of it at home, she was happy, alert, responsive, and expressive. A re-infection of her initial illness was more serious than the first, and the Lord, in his gracious mercy, did not require her to go through the same experience again. He had already seen her sacrifices, and her willingness to do His will again, and counted her to have completed her mission in this life and fulfilled the measure of her creation. Kathy is survived by her loving husband Allen, her mother, her three children, a son-in-law, a daughter-in-law, three grandchildren, four sisters with their families, and numerous other extended family members. Her heritage is faith and strength in the Church. Her legacy is a loving and adoring family. Funeral services will be held at 10:00 a.m. on Friday, December 13, 2013, at the Lakeside 2nd Ward Chapel, 2530 West 200 South, Provo, UT, 84601, with a viewing beginning at 9:00 a.m. that same morning. A family graveside service and burial will follow at the Meadow City Cemetery, Meadow, Utah.

Kathy Jean Keske was born in the covenant in Pocatello, Idaho, to Vernal Junior Taysom and Nola Jean Evans Taysom. She enjoyed an idyllic childhood and youth growing up in Pocatello. While her father served as a bishop, one of her fondest... View Obituary & Service Information

The family of Kathy Jean Taysom Keske created this Life Tributes page to make it easy to share your memories.

Kathy Jean Keske was born in the covenant in Pocatello, Idaho,...

Send flowers to the Keske family.