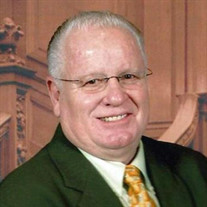 Beloved husband, father, brother, grandfather, great-grandfather, and friend, Almon Kay Hayes, 75, passed away December 28, 2020, due to complications from COVID-19. Kay was born into the loving family of Edgar and Genevieve Hayes on June 28, 1945 in Moab, Utah. He was the fourth of five sons. Kay grew up and attended school in Moab. After graduation from Grand County High School, he moved to Provo to attend school at BYU and Provo Technical College. Kay met and married Vera Varney in 1964. They had four children and later divorced. Kay eventually returned to Moab, joining his brother Jim at J&B Body Shop. He met Marilyn Fullmer and the two married in June of 1976. A few years later they moved to Provo, where they welcomed a son to their blended family. Kay then joined his brother Dan at D&H Auto Body. Kay is survived by his wife, Marilyn; children, Sally (Chris) Kaiser, Angel (Mitch) Vise, Robert (Stacy), Mia (Jeremy) Simmonds, and Jared; step-children, Brian (Michele) Fullmer and Bonnie Fullmer; 18 grandchildren and 6 great-grandchildren. He is also survived by his brothers, Rex, Reed, Dan, and Jim Hayes. The family would like to thank everyone for the outpouring of love and support that has been shown throughout this difficult time. Due to COVID-19 restrictions, a private viewing will be held for immediate family only on Wednesday, January 6, 2021. Condolences may be expressed to the family at www.bergmortuary.com.

The family of Kay Hayes created this Life Tributes page to make it easy to share your memories.

Send flowers to the Hayes family.