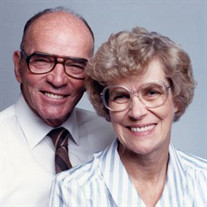 "Together Again" Keith Pharon Burningham, 90, passed away the morning of December 30, 2014. He was born November 24, 1924, to Pharon and Luella Wilson Burningham, the oldest of three children. He served in the Marine Corps during WWII. After the war, he worked at Madsen Dry Cleaners in Provo and Geneva Steel, retiring from Geneva Steel in 1985. He married his eternal companion, Rita Florence Anderson, July 23, 1946, in the Manti Temple. He was an active member of The Church of Jesus Christ of Latter-day Saints. Keith served as scout master and in many other callings. He loved the great outdoors, fishing, hunting, camping and most of all sharing these with his family. Keith and Rita were the proud parents of six children: Joel (Kathy), Spanish Fork; Susan Hall, Orem; Danny (Linda), Orem; Kelly, Auburn, WA; Gil (Cammy), Chester; Kris Ann (Jim) Parcher, Coos Bay, OR. They were blessed with 14 grandchildren and 20 great-grandchildren. Many more call him dad or grandpa. He was preceded in death by his sweetheart, Rita, who passed away December 2, 2003; his sister, Margie Walker; brother, Dell; grandson, Mark Joel Burningham; and great-grandson, Max J Patterson. Funeral services will be held at 11:00 a.m., Monday, January 5, 2015 at the Cascade 6th Ward Chapel, 400 East 400 North, Orem, Utah. Friends may call at the Berg Mortuary of Orem, 500 North State Street, Sunday, January 4, from 6-8:00 p.m. and at the church Monday from 9:30-10:45 a.m. prior to services. Interment, Timpanogos Memorial Gardens, Orem, Utah. Condolences may be sent online at www.bergmortuary.com.

"Together Again" Keith Pharon Burningham, 90, passed away the morning of December 30, 2014. He was born November 24, 1924, to Pharon and Luella Wilson Burningham, the oldest of three children. He served in the Marine Corps during WWII. After... View Obituary & Service Information

The family of Keith Pharon Burningham created this Life Tributes page to make it easy to share your memories.

Send flowers to the Burningham family.