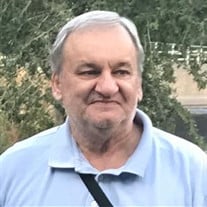 Keith DANA Casper was born on January 20, 1950, in Provo, Utah, to Keith Reuben Casper and Audrey Pulsipher Casper. He was a life-long resident of Orem; he attended Westmore Elementary School, Lincoln Junior High, and he graduated from Orem High School in May 1968. On February 14, 1969, he married Billie Hundley and their marriage was solemnized on February 28, 1976 in the Provo Utah Temple. Dana and Billie are the proud parents of Ian Scott Casper, his wife Sherry, and their children Jordan, Arynn, Meghan and Lauren; Heath Casper; Camie Jacobs, her husband Andy, and their children Sydney Drew, Mya, Cameron, and Ty; Adam Casper, his wife Lindsey, and their children Jacob, Nicholas, Cole and Roan; Kevin Casper and his son Declan. From his earliest years Dana worked hard. He worked at Miller Skis, Muir-Roberts Fruits, and Rhode Way Inn during junior and senior high school. He worked for US Steel Geneva Works and the reconstituted Geneva Steel for 34 years. After Geneva closed for good he returned to school at UVU where he completed HVAC training. He then worked for Provo City as a facilities maintenance person until he was stricken with cancer for the third time in July 2014. He loved his kids and grandkids with his entire heart and soul. With them he planted an annual vegetable garden, went hunting and fishing, and lots of hugs and love. One of his most precious experiences was with his oldest granddaughter Arynn. When she was in kindergarten he watched her every school day morning and walked her to school. He was an elder in The Church of Jesus Christ of Latter-day Saints and served as Scout Master and home teacher. He is survived by his family and his siblings, Debbie Donaldson and Brent Casper. He was preceded in death by a brother, Terry Casper, and his parents, Keith and Audrey Casper. Graveside services will be held at 11:00 a.m., Friday, October 19, 2018 at the Orem City Cemetery, 1500 North 800 East, Orem, Utah. Friends may visit with the family from 6-8:00 p.m., Thursday, October 18 at the Berg Mortuary of Orem, 500 North State Street. Condolences may be expressed at www.bergmortuary.com.

Keith DANA Casper was born on January 20, 1950, in Provo, Utah, to Keith Reuben Casper and Audrey Pulsipher Casper. He was a life-long resident of Orem; he attended Westmore Elementary School, Lincoln Junior High, and he graduated from Orem... View Obituary & Service Information

The family of Keith Dana Casper created this Life Tributes page to make it easy to share your memories.

Send flowers to the Casper family.