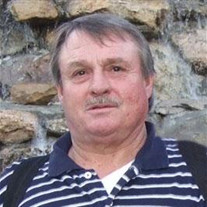 Kim Karl Taylor, 60, affectionately known as “Tank”, passed away peacefully on Nov. 2, 2015 from complications of renal cancer. Kim was born Aug. 3, 1955 in Provo, UT to Karl Lloyd Taylor and JoAnn Allen Taylor; the first son and oldest of 4 children. Kim grew up in Lakeview working on the family dairy and sugar beet farm. He learned at an early age responsibility and hard work as he attended to the dairy cows, calves and fields of sugar beets. He also learned the joy of having open space in which to horseback ride, swim and fish in the river and any outdoor activity having to do with friends. Kim attended school in Orem and graduated from Orem High School in 1973. After high school he began a career in the concrete industry working with his father and many good friends. In February of 1981, Kim married Cathy Payne in Springville, UT. To this marriage 2 sons were born, of which Kim loved dearly; Karl Taylor and Allen Taylor. Kim and Cathy were later divorced. Eventually, Kim made a move to Idaho where he worked for a number of years in the manufacturing industry. He enjoyed his years in rural Idaho where fishing and long country drives with good friends were a frequent occurrence. After several years, Kim returned to his roots in Lakeview and enjoyed his ties there with many friends and family. He loved Lakeview and resided there until his passing. Kim is survived by his two sons: Karl Ryan Taylor, Orem, UT; and James Allen Taylor, Orem, UT. Siblings: Cyndy Taylor Butler (Duane) Orem; Dana Babinchak, Ogden; Jay Trevino (Bruce) Minnesota; Allen Lane Taylor (Natalie) Pleasant Grove; Rudy Trevino (Dixie) Orem; Gina Scott (Clive) Ogden; Nanette Taylor, Orem; Ruby Pututau (George) Provo; Clint Taylor (Kim) Orem. Stepmother, Dina Taylor Madsen (Kay) Orem; and numerous aunts, uncles, cousins, nieces and nephews who thought he was simply the best. He is also survived by many loyal, loving and life-long friends who shared years of memories and experiences with him. And, as Tank would always say, “Roses are red…Violets are pink…” The family would like to extend a special thank you to the A-Plus Hospice team, and Alpine Valley Care staff for their caring and selfless service in the last few weeks of Kim’s life. Funeral services will be held at 2:00 p.m., Saturday, Nov. 7, 2015 at the Berg Drawing Room Chapel, 185 East Center Street, Provo, Utah. Friends may visit at the mortuary Friday, Nov. 6 from 6-8:00 p.m. and Saturday from 1-1:50 p.m. prior to services. Interment will be at the Provo City Cemetery, 610 South State Street, Provo. Condolences may be extended to the family at www.bergmortuary.com.

The family of Kim Karl Taylor created this Life Tributes page to make it easy to share your memories.