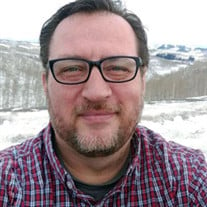 Kirk Joseph Mecham, 53, beloved father, grandfather, and entertainer, passed away January 9, 2021. Kirk was born July 20, 1967, the son of Lynn and Joanne Mecham, and the brother of Jolynne (Wheelhouse), Emily (Wilson), and Marianne Mecham. Kirk has three beloved daughters: Ally (Campbell), through his previous marriage with Alexa Blair Anderson, and Jamie and Shylee, through his previous marriage with Kelly Weston. He was “Papa Bear” to his granddaughters, Aurora and Nova Campbell, and was happy cuddling his little ones and finding new ways to make them laugh. Kirk was a beloved son of the Bear River Valley and demonstrated great prowess in sports, music, and the theater. He could dunk the basketball with equal talent as he could play his beloved bass trombone, though his vocal gifts would prove exceptional and enduring. Kirk was provided with great mentors in his early years to develop his many God-given talents including Carl Ashby, BRHS Accapella Choir who taught him the love of vocal harmony. Jay Golden Ward, BRHS LanSirs, who fostered in Kirk a lifelong love of big band Jazz, Larry Webb, BRHS Basketball, who fostered a love of teamwork, and with great fondness, Dee and Nedra Pace who opened up his love of the stage, his love of being an entertainer, and with whom Kirk remained close his entire life. Kirk held lead roles in many high school and community theater presentations throughout his life and left indelible impressions from each role. Note: with Dee’s passing in early 2020, many imagined their reunion and great joy in each other’s renewed presence. Kirk served a successful two year mission from 1986–1988 for The Church of Jesus Christ of Latter-day Saints in the Fortaleza Brazil Mission. He learned to love the Brazilian people, learned to speak Portuguese, and enjoyed many lifelong friendships as a result of his service. Kirk enjoyed his time at USU where he loved singing with Derek Furch’s USU Ambassadors. From that group sprang the successful singing group, Eclipse. Kirk was proud of his work as the bass singer (and chief Muppets impersonator) for that incredible and unique six-part harmony group. Kirk’s work with Eclipse included international attention at the opening and closing ceremonies of the 2002 Olympics in Salt Lake City, and he performed with many well-known artists. Their several recordings achieved success and he loved his time singing with Paul Hansen, Dan Kartchner, Kevin Jones, Shayne Taylor, and Jake Despain. Kirk continued his love of harmony with the Fat Old Guys Band (FOG) with continued concert successes and many successful YouTube clips demonstrating astonishing harmonies and vocal innovations. Kirk loved his FOG brothers Jared Allen, Jeremiah, and Brett. They shared many laughs at venues across the West. If there is a stage in Utah, it’s likely that Kirk performed on it, sharing not only his gifts, but his impeccable comedic timing. He was always the quickest wit in any room. Kirk was deeply spiritual. His last social media post was a profound testimony of his Savior, Jesus Christ. Kirk’s experience, posted the day before his death was not coincidental, but the love and acceptance of a merciful Savior for a life well lived despite personal shortcomings which he felt deeply. Kirk wrote: “Have you ever had a moment when you were so overcome with the Spirit that it nearly floored you? I have always been tremendously moved by music. This afternoon, I happened to have some tunes playing and from deep in the playlist “I Can Only Imagine” started up. As with many, I’m sure, this is a big favorite of mine and one I’m always going to belt out in unison with the voice on the recording (in this case Alex Boye). As we hit the crescendo into the chorus, I was overcome and brought to my knees…weeping. And…still weeping. There would be no more singing by me. At this moment, I’m not sure what my spirit needed and why it was so profoundly touched, but I’m grateful to my Father and my Savior for the experience today.” There would be no more singing in mortality for our beautiful friend. His deep profound voice, lost to us in death, sings in the heavenly choirs, resonating with all creation. The God of a trillion stars knew his name and loves Kirk. He touched innumerable people through his life and performances. His unique gifts known to God, continue to inspire. Authors note: Thank you for a lifelong friendship Kirk. As others have noted, despite separation by distance over many years, each occasion we got together in Utah was as if no time had elapsed at all. I count this as a testament to our friendship. Feeling so much loss. Intentions to renew our friendship when done scratching out a living…..someday, will have to wait. I’m looking forward to picking back up in the eternities. Until then, I’ll think about you often. CHIRP!!! -Hyte Johnson Condolences may be expressed to the family at www.bergmortuary.com.

The family of Kirk Joseph Mecham created this Life Tributes page to make it easy to share your memories.

Send flowers to the Mecham family.