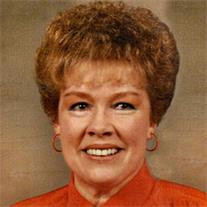 LaWana Frandsen Hall, 78, passed away peacefully on April 17, 2011 to be reunited with her sweetheart who had passed on just five months prior. She was born October 9, 1932, to Leo A. and Helen Harper Frandsen in Orem, Utah. She married Dale Drummond in 1950 and they divorced a short time later. LaWana then married Garth F. Penrod in 1952. Together four children were born to this union. They later divorced in 1967. LaWana married "her man" Bernard F. Hall, in 1968. Their marriage was later solemnized in the Provo LDS Temple. LaWana grew up and attended schools in the Orem/Provo area, furthering her education at Provo College in administrative duties. She worked for several businesses in Utah County before obtaining employment with the Utah Division of Wildlife Resources as an office manager where she later retired. She was an avid horse lover having served as Rodeo Queen in the Spanish Fork Fiesta Days in Spanish Fork, Utah, in 1960. LaWana was a talented artist and musician. Together LaWana and Bernard owned and operated B & L Arabians for years. They loved to ride both their horses and Harley Davidson's side by side. She could never pass up the opportunity to purchase a "good-looking" pair of cowboy boots. Survivors include her children, Kris (Dallas Lovern) John, Payson, UT; Candy Jenkins, Provo, UT; Randall (JoAnna) Hall, Payson, UT; Connie (Keith) Peterson, Springville, UT; Peggy (Dwayne) Ivie, Payson, UT; sister's Joan (Tom) Chynoweth, Elk Ridge, UT; Norene (Fred) Addis, Magna, UT; 19 grandchildren and 31 great-grandchildren. She was preceded in death by her husband and parents, daughter Sandy Lou Hall, step-son Byron Hall, grandson's Korey John and Christopher Sheldon. The family would like to thank the staff at Autumn Park Assisted Living in Mt. Pleasant and Hearthstone Manor in Spanish Fork for their loving care of our mother, sister and grandmother. Special thanks to Candice Sanders, Heidi Sorensen, and Thomas Moore. "Are you ready boots?…..Start walkin'!" Graveside services will be held at 11 a.m., Friday, April 22, 2011 at Eastlawn Memorial Hills, 4600 Eastlawn Drive, Provo, Utah. Friends may call at Berg Mortuary of Provo, 185 East Center, Friday morning from 9:30 until 10:30 prior to services. Condolences may be sent through her obituary on www.bergmortuary.com.

LaWana Frandsen Hall, 78, passed away peacefully on April 17, 2011 to be reunited with her sweetheart who had passed on just five months prior. She was born October 9, 1932, to Leo A. and Helen Harper Frandsen in Orem, Utah. She married Dale... View Obituary & Service Information

The family of LaWana Hall created this Life Tributes page to make it easy to share your memories.