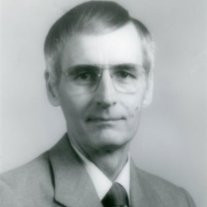 It is nearly impossible to accomplish everything you can dream of in the short span of 86 years, but Dr, Lael J. Woodbury did just that. Every aspect of his life proved that Lael Loved God, Country, and Family. Lael was born in Fairview, Idaho on July 3, 1927 to Raymond and Wanda Woodbury. From humble beginnings as the son of a butcher with only a 9th grade education, Lael lived larger than the stature of his 6’ frame. Beginning at the tender age of 15, he served the US Navy for 4 ½ years during World War II in the Pacific. He married his first wife Laurabelle Young in Reno, Nevada, August 1944. After the war and Laurabelle’s death to tuberculosis, Lael was raising their daughter Carolyn Inez, when he met Margaret Lillian Swenson. They were married in the Logan Utah Temple December 19, 1949. They added three more children, Shannon Margaret, Jordan Ray, and Lexon Dan. Lael received his BS from Utah State University in 1952, his Master’s from Brigham Young University in 1953 and his PhD from the University of Illinois in 1954. He was an Associate Professor at BYU from 1954-1961. He taught at the University of Illinois, Ohio’s Bowling Green State University, Colorado State College and the University of Iowa. He was also a Professor at BYU in the Theatre and Media Arts Department. He served as Dean of the College of Fine Arts and Communications at BYU from 1973 until 1982. In 1992, Lael retired from BYU and was granted emeritus status. Lael was formerly the Chairman of Utah Arts and Education and Director of the Utah Valley Red Cross. He was a member of The Church of Jesus Christ of Latter-day Saints. Along with multiple other callings, Lael served as Stake President of the BYU 2nd Stake. He and his wife Margaret served a mission in the New York South Mission. He served 27 years as a sealer in the Provo Temple. Lael acted in multiple LDS films and narrated word-for-word the Book of Mormon, Doctrine and Covenants, Pearl of Great Price, and New Testament. Lael also wrote extensively, publishing more than 50 works including books. He acted in and directed numerous plays, including the Hill Cumorah Pageant. During his career at BYU, Lael was given many honors including the dedication of a professional production of Oedipus Rex in 1985 by the Theatre Borgia of San Francisco. Lael received the BYU Alumni Distinguished Service Award in 1975, and was awarded the Sidney B. Sperry Symposium Award in 1975. Lael was named the Fine Arts Guild Patron of the Year in 1982. In 2009 he was further honored by the college of Fine Arts and Communications and received the Franklin S. Harris Award. Lael lived a life that most of us can only imagine. He rubbed shoulders with those we might consider elite. And yet with all of this, Lael wore humility in place of his awards. He never forgot his beginnings. He never forgot who he was. He loved his family and every member knew it. He was the father figure in the lives of many of his grandchildren and he took that calling seriously, including blessing and baptizing. He made every effort to share his love and his testimony to his family. At our most recent family gathering, Lael once again testified of his love for God, his belief in the Savior Jesus Christ and his love for and belief in each of us. He called us. He listened to us. He took time personally with each of his children, his grandchildren, his great-grandchildren, and even his great-great-grandchild. He knew our names, our lives, our happiness our heartaches. He was always there when we needed him. Lael was our family Patriarch and the best example we could have ever had. There is and was no greater Husband, Father, or Grandpa. They say only Jesus was perfect, but Lael came as close as man can. Lael passed away on September 24, 2013 in Orem, Utah. He was surrounded by his family and spent his final moments with his sweetheart Margaret by his side. Lael was preceded in death by his parents, most of his siblings, first wife Laurabelle Young, his daughters Carolyn Inez Hancock, Shannon Margaret Busenbark and son Lexon Dan Woodbury. What a glorious reunion as they’ve welcomed him home! Lael is survived by his wife of 63 years, Margaret, his son Jordan (Debbe) Woodbury, and his sister Delma (Ken) Baldridge. He also leaves his children-in-law, 13 grandchildren, 35 great-grandchildren, and 1 great-great-grandson. Lael left us with the greatest legacy possible –love. He brought honor to the Woodbury name. We will always miss him but never forget him. We want to be like him. We love you Lael!!! Funeral services will be held at 11:00 a.m., Tuesday, October 1, 2013 at the Oak Hills 7th Ward Chapel, 1038 North 1200 East, Provo, Utah. Friends may call at the Berg Mortuary of Provo, 185 East Center Street, Monday from 6-8:00 p.m. and at the church Tuesday from 9:30-10:45 a.m. prior to services. Interment, Weston City Cemetery, Weston, Idaho. Full obituary can be found online at www.bergmortuary.com.

It is nearly impossible to accomplish everything you can dream of in the short span of 86 years, but Dr, Lael J. Woodbury did just that. Every aspect of his life proved that Lael Loved God, Country, and Family. Lael was born in Fairview, Idaho... View Obituary & Service Information

The family of Dr. Lael J. Woodbury created this Life Tributes page to make it easy to share your memories.

It is nearly impossible to accomplish everything you can dream...

Send flowers to the Woodbury family.