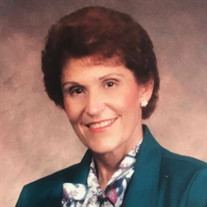 Our wonderful sister, aunt, cousin, friend and ministering angel Lana Brown passed away March 27, 2018. Lana was born in Payson, Utah on February 19, 1941 to John Earl and Retta Ludlow Brown. She grew up in Benjamin and Provo. She graduated from Provo High School and BYU with a Bachelor of Science and Nursing Degrees in 1963. She had been diagnosed with Multiple Sclerosis in 1962 but didn’t let it keep her from completing her degrees. She went on to get special training in Physical Rehabilitation from the Rusk Rehab and Physical Medicine Institute at NYU, Univ. of Calif. at SF, BYU Continuing Education and the Center for Independent Living at Berkeley Calif. She became Director of Rehabilitation at LDS Hospital until her MS became too severe and she was forced to take 2 yrs. off. (During this time she had to have bed rest for several months). As soon as she could get out of bed, with full leg braces, she attended seminars on grant writing in CA and CO. Lana then wrote a grant to start her own non-profit business, Handicapped Awareness Inc. Lana was instrumental in helping make Utah County sidewalks and buildings become wheelchair accessible. This soon spread to other counties across the state. As soon as her health improved, she went back to her first love, nursing, doing home health from her wheelchair. She was also hired to direct the Resource Center for the College of Nursing at BYU Provo and SLC. Then she became the nurse educator for the new Physical Rehabilitation Center at UVRMC until 2001. Lana went back to serving in the BYU nursing department until she retired in 2006. She was crowned Miss Wheelchair Utah in 1976 and also served 3 years as a Utah Delegate at the White House Conference on Employment of the Handicapped. She received the “Golden Key Award” for Handicapped Awareness from the Governor. Lana was an active member in many professional and civic organizations. She was the recipient of the International Sertoma “Service to Mankind Award” as well as many other service awards. She spent most of her life in service to others and as an advocate for the handicapped. She has been an active member of the LDS church and held many callings including Relief Society President. She was featured at the International Women’s Conference in Houston, Texas as one of many Outstanding Latter-Day Saint Women. She loved doing genealogy and kept detailed and intricate scrapbooks of her life. Lana enjoyed and was very proficient in leather tooling, winning awards for her work. She loved painting, traveling, camping and all crafts. Lana spent a lot of time in her handicapped van that she named “Tangerine Turtle.” It was recognized by many Provo residents. Although she had no children of her own, she was loved and adored by her nieces and nephews. Lana is survived by Jeanene (Alan) Morgan, Provo, Urla Smith, Roy, Nephews: David Morgan, Provo, Dr. James (Sue) Morgan, Provo, Troy Lindley, Reno, Jeffrey (JeraLeigh) Morgan, Vernal, Jaylan (Amy) Morgan, Provo. Nieces: Cathreen Stevens, SLC, Becky (John) Corwell, Draper, Tamra Weidmeyer, Roy and best friends Linda & Dale Ballard, SLC. She loved and took care of countless great nieces and nephews including her special nephew Casey Christensen who has Down syndrome. She was preceded in death by her parents, a nephew Kent T. Stevens and great nephew Mike Versluis. We thank the directors and staff at Provo Assisted Living Center, especially her nurse Vanissa and Lana’s nephew David for their loving care. Funeral services will be held at 11:00 a.m., Monday, April 2, 2018 at the Provo Peak 12th Ward Chapel, 1456 East 300 North, Provo, Utah. Friends may call at the Berg Mortuary of Provo, 185 East Center Street, Sunday, April 1, from 6-8:00 p.m. and at the church Monday from 9:30-10:45 a.m. prior to services. Interment will be in the Provo City Cemetery next to her parents. Condolences may be expressed to the family at www.bergmortuary.com.

Our wonderful sister, aunt, cousin, friend and ministering angel Lana Brown passed away March 27, 2018. Lana was born in Payson, Utah on February 19, 1941 to John Earl and Retta Ludlow Brown. She grew up in Benjamin and Provo. She graduated... View Obituary & Service Information

The family of Lana Brown created this Life Tributes page to make it easy to share your memories.