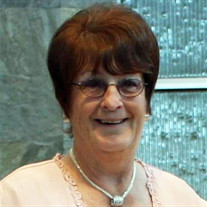 Lana Jean Finch Barclay was born on September 12, 1949 in Payson, Utah. She was the first child of Betty Davis and Wendell Kirk, who later divorced. Her mother married Fenton Smith Finch in 1956, and Lana and her sister Debra were raised by Betty and Fenton Finch in Provo, Utah. They were later sealed to their parents and other siblings in the Manti Temple. Lana always considered him as her dad, caring for him when he became widowed and ill later in life. Lana attended Provo High, graduating in 1967. After high school, she attended Beauty School to certify as a beautician. She married Larry Arthur Barclay in March of 1968 in Provo. They had one child, Natalie Barclay, in 1972. They were later divorced. Lana was a successful Avon representative for many years, and loved her ladies. Lana lived in Provo, Orem, Vallejo, California, and resided for many years with her daughter and her family in Spanish Fork until her final years were spent in Stonehenge Nursing Home in Springville, where she could get the medical care she needed. She died on August 2, 2019 at Utah Valley Hospital surrounded by most of her family. She was preceded in death by her parents, aunt and uncle, and ex-husband. She is survived by her children: Natalie (Monty) Billie, Suzanne (Alvaro) Ricardez, and Dawn (Steven) Garrison; grandkids: Raven, Shakotah, and Jericho Billie; AJ, Selena, Semorra, Scarlett, and Alshon Ricardez; and Shasta and Taylor Garrison; as well as her siblings, Debra King, Sandra Vogel, Cathy Sorensen, and Barry Finch. Lana adored her grandkids. She tended children for many years and considered them her kids too. She was a loving aunt to her nieces and nephews. She loved organizing family parties, decorating for the holidays and spending the whole day preparing all her good recipes. On the 4th of July she always came decked out in patriotic clothes and jewelry. She was the life of all our gatherings; coming first and leaving last. Her boisterous laugh could always be heard. She had a positive outlook and was a happy, friendly person despite multiple health problems. She always seemed to remember a small gift for unexpected guests at the many family parties she attended. She will be missed by all the many lives she impacted. Funeral services will be held on Friday, August 9, 2019 at 11:00 a.m. in the Spanish Peak Ward, 1750 East 750 South, Spanish Fork, Utah. The family will receive friends at Berg Mortuary, 185 East Center Street, Provo, Utah on Thursday, August 8 from 6-8:00 p.m. and at the church Friday from 9:30-10:45 a.m. prior to services. (Family should arrive at 10:00 a.m. for final goodbyes.) Lana will be interred next to her mother and father and Aunt “Min” in the Timpanogos Memorial Gardens Cemetery, 1000 North 400 East, Orem, Utah. Condolences may be expressed at www.bergmortuary.com.

Lana Jean Finch Barclay was born on September 12, 1949 in Payson, Utah. She was the first child of Betty Davis and Wendell Kirk, who later divorced. Her mother married Fenton Smith Finch in 1956, and Lana and her sister Debra were raised by... View Obituary & Service Information

The family of Lana Jean Finch Barclay created this Life Tributes page to make it easy to share your memories.

Send flowers to the Barclay family.