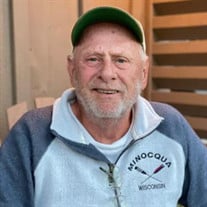 Lance Dunford Haddock, 73, passed away peacefully at his home from lung cancer, with family by his side, listening to his favorite songs from his “Master Playlist” and drinking his favorite “Whiskey Sours.” The song “Summer of 69” was playing when he took his last breath; then incredibly, his favorite song from his favorite movie began to play… “Never Ending Story.” We were all sure he played that song. And in Lance’s words, “Let’s get this show on the road!” Lance lived a “Tom Sawyer” life as a boy growing up in Provo, Utah. He was the oldest with two younger sisters, Jan and Gayle. He and his best “dog” friend, Sally, spent every waking hour playing with the neighborhood boys. They had adventures exploring the Provo River, brick yards, and hopping on the Heber Creeper to explore areas outside of the city. He would leave the house after school on a Friday afternoon and be gone until Sunday evening, fishing, playing baseball, swimming, and other, sometimes mischievous, yet harmless, activities. As an adult, he continued to enjoy thrilling adventures including bungee jumping, hot air ballooning, and skydiving. He loved gardening, which he took great pride in his yard; golf, lighthouses, baseball, collecting airplane models, Budweiser steins, and coins. He loved participating yearly in the “Radials N’ Rivers” airshow in Lewiston, Idaho. He flew on several World War period planes, his favorite flight, and airplane being the Boeing B-17 “Flying Fortress” bomber. Lance worked as a retail manager for over 50 years. He began his career working for Mr. Skaggs in Provo, Utah where his first position was in the soda fountain shop. Over the years he climbed the ladder and spent most of his career managing retail pharmacy stores. He was working for Rite-Aid when he retired in 2017. During his career he earned a leadership award and was known for being able to bring order to failing and chaotic stores. Lance married and later divorced, Deanne Davies in 1967, and they had 1 daughter, Jodi. In 1972, he married Vicki Loveless and they had 4 daughters, Kerry, Jillyn, Jennifer, and Kim. They divorced in 1999 but remained friends until his death. In 2010, he married the “love of his life”, Wendy Sue Haws, and welcomed her 5 children, Rebekah, Hatley, Alex, Kallie, and Jonah with open arms. Lance was passionate about his family, traveling to attend grandchildren’s births, sporting events, graduations, and weddings. He is survived by his wife, Wendy; children: Jodi Kittinger, Kerry (Ryan) Light, Jillyn (Gary) Peters, Jennifer Haddock, Kim (Bryan) Hatch, Rebekah (Seth) Minnis, Hatley (Adam Wicks) Laughridge, Alex (Dalina Ramirez) Laughridge, Kallie (Devon) Flores, and Jonah (Taylor Buch) Hunt. His grandchildren: Hailey and Ryan Kittinger, Andrew (McKenna) and Zach (Erica Edens) Light, Taylor Willcuts, Tyler, Gracie, Charley, and Piper Peters, Bryce and Emily Haddock, Whitnee Hatch, Tirzah, Jeremiah, Levi, Silas, Eleanor, and Agatha Minnis, Zeena Flores, and Laura Hunt. He has 1 great-granddaughter, Ellery Willcuts. He is also survived by his sisters, Jan Auch and Gayle Lewis. Lance was often heard saying, surrounded by his bustling family, “I did this!” Lance always had a tender heart for his furry friends. He had many dogs over the years with fond memories of all: Sally, Nixie, Sydnee, Lady, Maggie, and Coltie. Sydnee, who died in 2014, always held an extra special place in his heart. Lance rescued Sydnee as a puppy from an abusive situation. He always said, “And Sydnee rescued me right back.” He is preceded in death by his parents, Logan “Rusty” Dunford Haddock and Betty Jean (Curtis) Haddock, and granddaughter, Kaylee Hatch. There will be a “Celebration of Lance’s Life” Saturday, November 6, 2021 from 11:00 a.m. to 2:00 p.m., with a light lunch and time to visit with family and friends. The “Celebration” will begin at 12:00 p.m. (noon). The event will be held at the White Willow Reception Center, 342 North 500 West, Provo, Utah. In lieu of flowers, Lance has requested gifts be donated to St. Jude Children’s Hospital on their website www.stjude.org. Condolences may be expressed to the family at www.bergmortuary.com.

Lance Dunford Haddock, 73, passed away peacefully at his home from lung cancer, with family by his side, listening to his favorite songs from his &#8220;Master Playlist&#8221; and drinking his favorite &#8220;Whiskey Sours.&#8221; The song &#8220;Summer... View Obituary & Service Information

The family of Lance Dunford Haddock created this Life Tributes page to make it easy to share your memories.

Lance Dunford Haddock, 73, passed away peacefully at his home...

Send flowers to the Haddock family.