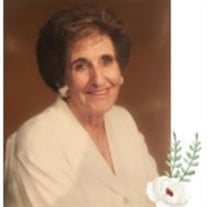 LaRae Roberts Deaton returned to her Heavenly Father on Friday, August 21, 2020 at the age of 93. LaRae was born December 4, 1926 in Provo, Utah; she had two sisters and one brother. Her childhood consisted of loving family relations and activities which lasted her entire life and which she used as a model to raise her own family. LaRae was energetic (lovingly dubbed as “SPUNKY”) and curious about the world around her which she traveled broadly in the later stages of life. She has visited every continent on the earth except Antarctica. Her passport was full. LaRae was one of the “greatest generations” who knew how to work hard, complain less and love all—even if you don’t like them. She was as industrious as a honey bee and often remembered for the use of her hands. To her they were the greatest tools ever invented and she knew how to use them from quilting a countless number of quilts (which she loved to give away), to canning fruit and planting flowers (although she hated dirt in her nails). Even in her youth she used her hands on the basketball court where she played center for her league team which traveled to Hawaii on a steam ship in the 1940’s to play exhibition games. On that trip she broke her nose and had to wait until they docked to set it again. She was a faithful and active member of The Church of Jesus Christ of Latter-day Saints and filled many callings throughout her life. Serving was in her very nature and she taught others to always look for opportunities to be of service. If you ever received a cake from LaRae, count yourself lucky! She met and married Henry Owen Deaton and together they started a family consisting of three daughters and one son. Henry died on December 2, 1977. LaRae never married again. At her death she had 4 children, 18 grandchildren and 41 great-grandchildren. LaRae will be deeply missed but gratefully remembered as a charitable, patient, kind, loving and forgiving friend to all. Friends may visit with the family at a viewing at the Berg Mortuary of Provo, 185 East Center, on Thursday, August 27, 2020 from 6:00 to 7:30 pm. Private graveside services will be held at the Orem City Cemetery. Condolences may be expressed at www.bergmortuary.com.

LaRae Roberts Deaton returned to her Heavenly Father on Friday, August 21, 2020 at the age of 93. LaRae was born December 4, 1926 in Provo, Utah; she had two sisters and one brother. Her childhood consisted of loving family relations and activities... View Obituary & Service Information

The family of LaRae Roberts Deaton created this Life Tributes page to make it easy to share your memories.

LaRae Roberts Deaton returned to her Heavenly Father on Friday,...

Send flowers to the Deaton family.