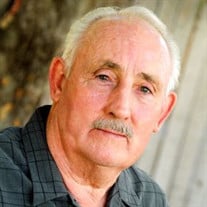 Larry Wayne Baum was born May 3, 1937. He left this world to be with many of his family, mother and father Leah and Lloyd “J” Baum, Grandma and Grandpa Canfield and Grandma Peay, on June 25, 2014. He loved growing up in the Edgemont area of Provo with lots of cousins and friends to play with. The “River Bottoms” was good for many adventures. Larry and Pat were married June 7, 1957 and were united for all eternity September 15, 1960 in the Salt Lake LDS Temple. They have three great children and spouses: K. Brett and Jodi Baum, Jodi and Joe Snyder, and Dede and Scott Henson, and a special daughter “adopted in their hearts,” Christina Baum. Grandchildren: Andy and Nate, Keeli and Lee, Kendahl and Correy, and Shelby and Kaden. Also three great-grandchildren: Chase, Josie and Haley. There are many “adopted kids” including: #2 son, Richard, Tamra, Mark, Bruce, Doug AKA Chuggles, Aaron and Danny. These are a few of his favorite things: gardening, making things from barn wood and logs, Arlen and Sherlaine, neighbors in Sky Mountain, rare steak, the Red Church, Betty, shooting his pistols, his Home Teachers and “his” Visiting Teachers, Dan and Jenene, Jean and Alex, BIG rocks, Lake Powell, fast cars, the “Governor’s Twenty”, being a great cop, boats, photography, motorcycles, the young people in BYU Singles Wards, Boy Scouts, friends in Edgemont 9th, friends in Hurricane 11th, pine trees, mountains and lots more! Honey, you will be missed, but we will be okay. The kids are looking after me and I am looking after them. We all love you. See you soon! Graveside services will be held on Wednesday, July 2, 2014 at 2:00 p.m. in the Eastlawn Memorial Hills Cemetery, 4800 North 650 East, Provo. There will be no public viewing prior to services. Friends should meet at the cemetery. Condolences may be sent online at www.bergmortuary.com.

The family of Larry Wayne Baum created this Life Tributes page to make it easy to share your memories.

Send flowers to the Baum family.