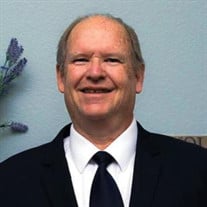 Larry Lee Reynolds, age 69, passed away on February 6, 2022, in Austin, Texas from complications of Leukemia. Larry was born on September 20, 1952, in Provo, Utah to Rex and Elaine (Dangerfield) Reynolds. He was the oldest of five kids. Larry graduated from Provo High in 1970 where he was a member of the Honor Society. Larry served a mission for The Church of Jesus Christ of Latter-day Saints in the Japan Central Mission from 1971-1973. After his mission, he attended Brigham Young University and graduated in 1976 with a degree in Accounting. He also earned a second bachelor’s degree, in Electronic Engineering Technology, in 1982. Larry met Jennie Ruth Dearden, his sweetheart, and the love of his life on Valentine’s Day, in 1974. They were introduced by a mutual friend at a dance, held at BYU. After the dance, Jennie didn’t think she would ever see him again. Larry really wanted to go out with her again, so he looked up her last name in the phone book. He called her up and asked her on a date. They have been inseparable ever since. They were married on June 6, 1975, and had 5 children. They were married for 46 years. Larry gained a lot of experience through his jobs over the years. In his youth, he delivered the newspaper and mowed lawns. His first real job was flipping burgers at HiSpot. While in college, he worked as a bank teller and as an accountant. For most of his life, he got to do what he loved which was working with computers as a Senior Software Engineer. He enjoyed cameras and photography, which he had done since college. He loved doing photoshoots, preserving videos and photos. His favorite pastimes were playing the guitar, listening to country music, dancing, bowling, golfing, and hiking. A new hobby was flying his drone. He also loved sports. He did his best to never miss a BYU football game. We joked with him that he bled BYU blue. But most of all, his pride and joy was his family. He never missed an opportunity to play with his grandkids. Larry was preceded in death by his father, Rex Reynolds and granddaughter, Kaiya Hodges. Larry is survived by his wife, Jennie; his children: Elizabeth (Brandon) Peak, Angela (Kevin) Hodges, Jared Reynolds, Ryan (Winnie) Reynolds, Jennalee (Travis) Jackman; and grandchildren: Alek, Natalee, Emma, Rylee, Megan, Braden, Kaylee, Reese, Dastan, Addie, Venser, and Kairos. His legacy is his family, and generations will live through Larry. Texas funeral services will be held at 3:00 p.m., Saturday, February 12, 2022 at the The Church of Jesus Christ of Latter-day Saints, 3751 Trail Ridge Pass, San Marcos, Texas. A viewing will held from 2-3:00 p.m. prior to services. Join us via Zoom for the Texas service: https://zoom.us/j/98245728424?pwd=U253UE9CSTFROVcvd2QvUlpBWWQyQT09. Utah funeral services will be held at 2:00 p.m., Saturday, February 19, 2022 at the Berg Drawing Room Chapel, 185 East Center Street, Provo, Utah. Friends may call from 12:30-2:00 p.m. prior to services. Interment, Eastlawn Memorial Hills. Join us via Zoom for the Utah service: https://zoom.us/j/96019856611?pwd=YjVnZXg2TVZraVRlWlVZUTMra2dZUT09. Condolences may be expressed at www.bergmortuary.com.

Larry Lee Reynolds, age 69, passed away on February 6, 2022, in Austin, Texas from complications of Leukemia. Larry was born on September 20, 1952, in Provo, Utah to Rex and Elaine (Dangerfield) Reynolds. He was the oldest of five kids. Larry... View Obituary & Service Information

The family of Larry Lee Reynolds created this Life Tributes page to make it easy to share your memories.

Send flowers to the Reynolds family.