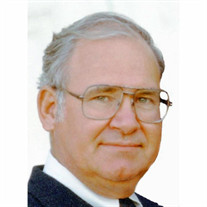 Larry was born February 20, 1936, in Durango, Colorado, to Francis Burnham Slade and Lovetta Anderson Slade, the second oldest of 12 brothers and sisters. He was raised on the family ranch in Hesperus, Colorado, where he learned from a young age the value of hard work and responsibility. Here he developed his love of horses that eventually shaped his career. He earned degrees from Brigham Young University, Virginia Polytechnic and University of California Davis. He married Bonnie Horrigan on September 12, 1962, in the Logan Temple. Together they had seven children, two died in infancy. They raised five children who blessed them with 13 grandchildren, each of whom he loved dearly. A gifted writer, teacher and researcher, Larry influenced the lives of many with his keen mind and wit. He taught at Cal Poly, Pomona; Colorado State University and Utah State University. He was nationally recognized for his pioneering research in equine natural gait development, nutrition and conformation. He was well known in Cache Valley as a cowboy poet and possessed a lovely tenor voice. He published “Horse Talk,” a collection of original poems, and produced several cd’s featuring original and traditional songs. He was a member of the Northern Utah Choral Society, Utah Symphony Chorus, the Willow Valley Singers and his Willow Valley String Band. He loved participating in local theater, his favorite role being Doolittle in My Fair Lady. As a member of The Church of Jesus Christ of Latter-day Saints, Larry served in many callings. He served two missions in Sweden; one as a young missionary and a couple’s mission with Bonnie. He loved his Swedish heritage and was fluent in the Swedish language. He served several years in the Logan Temple and enjoyed doing research in Swedish family history. His testimony was strong and he loved studying the gospel. He was most happy working on his ranch in Nibley where they lived for 38 years. He could be seen training horses, fixing fences, tossing hay, digging post holes, tending his garden, and riding his golf cart in the neighborhood. In 2015 he packed up and moved to Lehi, Utah, to spend more time with his family and enjoy a quieter life. His motto “cowboy up!” followed him through years of Parkinson’s Disease, eventually succumbing to congestive heart failure, passing on November 5, 2021, in Pointe Meadows Rehabilitation, Lehi, Utah. He is survived by his wife, Bonnie, children, Lisa (Darren Miller), Michael, Richard (Joelle Sudweeks), Rachel, Charles Randall (DaNae Judy); brothers Sheldon, LeGrand, Brent and Lowell; sisters, Rosalie (Joe D. England), and Gloria (Ken Decker); preceded in death by his parents, infant daughters Laura Gail and Rosalind, brother Jared, and sisters NancyJo, Loraine, Elaine, and Christine. Larry will be remembered for his steadfast principles, devotion to Bonnie, children and grandchildren, loyalty to his friends and generous service to others. Funeral services will be held at 11:00 a.m., Saturday, November 13, 2021 at the Lehi 48th Ward Chapel, 650 East 3200 North, Lehi, Utah. Friends may call from 9:30-10:45 a.m. prior to services. Interment follows at Timpanogos Memorial Gardens Cemetery (1000 N. 400 E., Orem). Condolences may be expressed to the family at www.bergmortuary.com. You may attend the service live at https://zoom.us/j/95478866814

Larry was born February 20, 1936, in Durango, Colorado, to Francis Burnham Slade and Lovetta Anderson Slade, the second oldest of 12 brothers and sisters. He was raised on the family ranch in Hesperus, Colorado, where he learned from a young... View Obituary & Service Information

The family of Larry Malcom Slade created this Life Tributes page to make it easy to share your memories.

Send flowers to the Slade family.