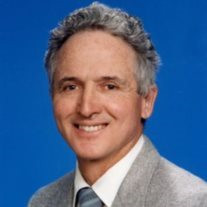 On the evening of Saturday, March 8, 2014, Larry Dwayne Smith, 76, of Provo, Utah passed away at home with his eyes gazing at a family picture. Larry was born on February 28, 1938 in Snowflake, Arizona, the oldest child of Andrew Outzen and Edna Richards Smith. He graduated from Snowflake Union High School, where he excelled in the orchestra. Larry studied at the University of Arizona and Brigham Young University and served a mission for The Church of Jesus Christ of Latter-day Saints from 1958-1960 in the New England States Mission. He then had a 40-year career (1964-2004) with the Arizona Department of Transportation. Larry was married for time and eternity to his sweetheart, Carolyn Grix, in the Ogden LDS Temple on September 10, 1976. They established their first home in Winslow, AZ, moving in 1983 to Tucson, AZ and finally in 2004 to Provo, UT. Larry was a devoted husband and father who found his greatest joy in spending time with his family. He always exemplified selfless service and Christ-like love. Larry loved music and found great joy in playing the piano, violin, and organ. Beginning at age twelve, he served repeatedly as a pianist and organist for his LDS wards. He also loved reading and studying, particularly LDS church history and scripture. After his retirement, Larry served for six years as an LDS Church service missionary and also contributed many hours to LDS family history indexing projects. Larry also enjoyed tending his garden, taking walks, and noticing the beauties of nature. Larry is survived by his wife, Carolyn; children: Julianne (Josh) Craft of Provo, UT; Cory (Heather) Smith of Mesa, AZ; Brian Smith of Rexburg, ID; Todd (Jacky) Smith of Troy, MI; sisters: Barbara (Mel) Stark of Clinton, MT; Janis (Jay) Pryor of Sandy, UT; Cherilyn (Merrill) Permann of Rockland, ID; and grandchildren: Andrew, Malia, Ava, and Ethan. Larry is preceded in death by his parents; his sister, Anona; and his granddaughter, Lily. Funeral services will be held at 11:00 a.m., Friday, March 14, 2014 at the Parkway 4th Ward Chapel, 2876 West 1390 North, Provo, Utah. Friends may call at the Berg Mortuary of Provo, 185 East Center Street, Thursday, March 13, from 7-8:30 p.m. Interment will be in the Provo City Cemetery. Condolences may be sent online at www.bergmortuary.com.

On the evening of Saturday, March 8, 2014, Larry Dwayne Smith, 76, of Provo, Utah passed away at home with his eyes gazing at a family picture. Larry was born on February 28, 1938 in Snowflake, Arizona, the oldest child of Andrew Outzen and... View Obituary & Service Information

The family of Larry Dwayne Smith created this Life Tributes page to make it easy to share your memories.