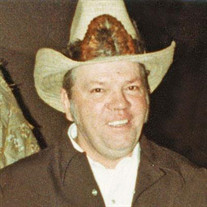 Larry Eugene Whiting died peacefully at his home on April 21, 2016. He was born July 29, 1935 to Theron Donald Whiting and Mary Isabell Gatherum Whiting, one of eleven children. He attended Timpanogos Elementary School, Dixon Junior High School and Provo High. Larry worked with his father and brother first repairing automobiles and then as an excavating contractor dba Whiting Construction Company until ill health prevented his doing so. During his life, Larry became skilled in many areas, somewhat a jack of all trades. He could repair almost anything that was broken. Larry loved the outdoors and enjoyed hunting, fishing, camping and four wheeling. Larry is survived by four sisters; Patricia Comaduran, Bonnie Williams, Sandi (Max) Shell and Tessie (Marty) Ewell. He is preceded in death by his parents, his brother Theron Daniel (Susie) Whiting, and sisters Betty (Shirleff) Powell, Joyce (Archie) Thompson, Jerri (Vern) Gulbransen, Peggy (Stan) Hortt and Donna (Mack) Camp. The family would like to express their thanks to the doctors, staff, nurses, aids and others of Utah Valley Regional Medical Center and Provo Rehabilitation and Nursing who provided care to Larry prior to his passing. Graveside services will be held at 12:00 noon, Wednesday, April 27, 2016 at East Lawn Memorial Hills, 4800 North 650 East, Provo, Utah. Family and friends may call at the Berg Mortuary Drawing Room Chapel, 185 East Center Street, Provo, Utah from 10:30-11:30 a.m. prior to services at the cemetery. Condolences may be expressed to the family at www.bergmortuary.com.

The family of Larry Eugene Whiting created this Life Tributes page to make it easy to share your memories.

Larry Eugene Whiting died peacefully at his home on April 21,...

Send flowers to the Whiting family.