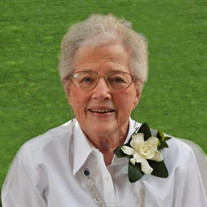 Orem, Utah – LaRue Florence Robison Tucker, age 89, died May 11, 2018. A longtime resident of Salt Lake City and Provo, Utah, she died peacefully at Seville Retirement Community in Orem, Utah. LaRue was born to Eldred V. and Esther F. Eaves Robison on August 17, 1928 in East Los Angeles, California. She grew up living above the family mortuary. She has one younger sister Artell LaVonne Robison Wardell. She attended Brigham Young University and received a degree in Physical Education. She began her teaching career at Granite High School in Salt Lake City, Utah. After many years of child-rearing, she returned to teaching at Backman, Lincoln, and Dilworth Elementary schools and Southeast Junior High. LaRue had two great passions: her family and music. On June 19, 1950 she married Ray Spilsbury Tucker of Orem, Utah in the Salt Lake LDS temple. They were the parents of five children and raised them in Salt Lake City, Utah. After becoming empty-nesters, they built their dream home on Riverside Golf Course in Provo, Utah and lived there until Ray’s death in 1991. LaRue’s others passion was her love of music. She was faithful member of the LDS church, and the majority of her church service was spent in some form of a church music calling. She was a gifted pianist, organist, and choir director. She was preceded in death by her husband, her parents, and her younger sister. She is survived by her five children: Jan Tucker of Las Vegas, NV; Michael Ray Tucker (Ann Ahlander) of Orem, Utah; David Robison Tucker (Jill Brown) of Salt Lake City, Utah; Debra Tucker Harrison (Clark) of Holliday, Utah; and Valerie Tucker Melville (Bradley) of Layton, Utah. She is also survived by nineteen grandchildren, and forty-four great-grandchildren. Funeral services will be held at 11:00 a.m., Wednesday, May 16, 2018 at Berg Mortuary, 500 North State Street, Orem, Utah. A viewing will precede the funeral from 9:30-10:45 a.m. Burial will be in the Orem City Cemetery. Condolences may be expressed at www.bergmortuary.com.

The family of LaRue Florence Robison Tucker created this Life Tributes page to make it easy to share your memories.

Send flowers to the Tucker family.