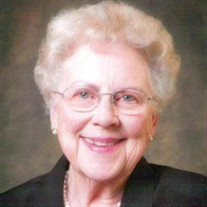 Our lovely mother, LaRue Murray, 97, peacefully passed away Sunday, April 18, 2021 on a beautiful spring morning at her home in Edgemont. LaRue was born in Rexburg, Idaho and graduated from Madison High School in 1942. She also attended Ricks College and was elected as the first female student body president and graduated with an associate’s degree in business in 1944. After graduating from Ricks College she rode a bus to Provo all by herself to attend Brigham Young University. While LaRue was attending BYU, she joined the Phi Chi Thela honorary business fraternity, and she also served 1 year as president. She was also selected to be a member of the White Key, a service organization on campus. While in her senior year, she worked part time as a secretary to Harold R. Clark, Dean of the Business College. LaRue graduated from BYU on June 6, 1945 with a BS degree in Business Education and a minor in English. Also during her senior year at BYU she met Charles L. Murray who she later married on July 19, 1946 in the Idaho Falls Temple. LaRue taught at Lehi and Orem High Schools and at Utah Technical College. She accepted a position with the BYU Credit Union eventually retiring as Loan Manager at UCCU in 1987. LaRue loved animals, especially cats. She loved house plants and gardening. She was famous for her raisin filled cinnamon rolls, orange chiffon cake, and baking home-made bread. She was an avid reader and was consistently buying books for all of her children to read. LaRue was honest in everything she did. Her word was her bond. One of her greatest attributes was her humility. She could find and see the good in all aspects of life no matter how dreary the situation may appear. She was completely and thoroughly devoted to her family, and the covenants she promised to keep. She was truly one of the most charitable, Christ-like people you could ever meet. LaRue was an active member of the LDS Church and had a very strong, deep, abiding testimony of the gospel of Jesus Christ. She loved the Savior with all her heart and appreciated the sacrifice he made for her. LaRue served in multiple organizations and loved to sing in the choir. She also served as an ordinance worker in the Provo Temple. LaRue is survived by her five children: Linda (Dave) Hardy, Payson; Dennis (Lee) Murray, Orem; Diane Murray, Taylorsville; Debra (Blair) Tucker, Orem; Scott (Karen) Murray, Provo; one stepson, Kelly (Binky) Goodrich, Rock Springs, Wyoming; a half-sister, Susan Cottle, Mesa, Arizona; a half-brother, Rodney Cottle, Mesa, Arizona; and one of her many favorite cats, Muffin. She is preceded in death by her parents, Clyde Abraham Cottle and Neta Fay Webster Cottle; husband, Charles; granddaughter; Kimberly Hardy; and all her siblings: Lucille (Ron) Hamilton, Spencer Webster (Lois) Cottle, Betty Jean (Ray) Bergman, and Donna Lue Cottle. LaRue’s celebration of life will be held at 1:00 p.m., Monday, April 26, 2021 at the Edgemont 21st Ward Chapel, 2900 North 650 East, Provo Utah. A viewing will be held at the Berg Mortuary of Provo, 185 East Center Street, Sunday, April 25 from 6-8:00 p.m. and again at the church Monday from 11:30 a.m.-12:30 p.m. prior to services. Mom will be laid to rest next to Dad, her sweetheart, at the Timpanogos Memorial Gardens in Orem, Utah. Condolences may be expressed to the family at www.bergmortuary.com.

Our lovely mother, LaRue Murray, 97, peacefully passed away Sunday, April 18, 2021 on a beautiful spring morning at her home in Edgemont. LaRue was born in Rexburg, Idaho and graduated from Madison High School in 1942. She also attended Ricks... View Obituary & Service Information

The family of LaRue Cottle Murray created this Life Tributes page to make it easy to share your memories.

Send flowers to the Murray family.