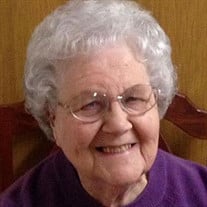 Edna LaRue Hoopes Sims, 92, of Provo, passed away at her home surrounded by her loving children on Tuesday, June 28, 2016, of natural causes incident to age. LaRue was born on March 6, 1924, in Rexburg, Idaho, to George Albert and Edna Baker Hoopes. She attended schools in Rexburg, graduating from Madison High School. She loved growing up in Rexburg and always considered it home. In her youth, LaRue was an accomplished violinist, performing in the high school orchestra then the Symphony Orchestra, at both Utah Agricultural College and Brigham Young University. One of the best experiences she ever had was playing in the "Messiah" at the Logan Tabernacle. After high school she attended Henager Business College, Utah State Agricultural College and Brigham Young University where she graduated in June, 1946, with a degree in Accounting. While at BYU she met Elmer Sims, a handsome, recently returned soldier and married him on June 26, 1946, in the Salt Lake Temple in a ceremony performed by Apostle Harold B. Lee. They settled in Provo where they reared their family of two sons and five daughters. Elmer passed away in 1995 after almost 50 years of marriage. LaRue first worked as an Accountant at Carson's Market, then as the Supervisor of the Graduation Evaluation Office at BYU, retiring in 1989 after 21 years of service. She loved her job at BYU and had many fond memories of her time there. LaRue is a member of the LDS Church and has served faithfully and magnified all of her church callings including Junior Sunday School Coordinator, Librarian, Visiting Teacher, and many other callings. She especially loved her stake calling to work in the Spanish Name Extraction Program. For many years she was also a member of the Daughters of Utah Pioneers (DUP). After retirement she was constantly busy writing many family histories, a quarterly family newsletter, creating her yearly family scrapbook pages and hosting her annual family Christmas party. Family meant everything to her and she worked hard to keep her expanding family connected. She has faithfully followed BYU Basketball since she was a student at BYU and is their #1 fan. LaRue is survived by her five living children: Kathleen (Bruce) Flygare, Orem; Rolayne (Barry) Edwards, Highland; Lynnette (Warren) Child, Cottonwood Heights; Marvin H. (DeAnn), Sandy; JaVan of Provo. She was preceded in death by her husband, Elmer; three children: Boyd H. (Susan), West Jordan; Marjean (Terry) Farrer, Provo; and baby Joel H.; grandson, Lonny B. Flygare (Lisa), and an adopted "daughter-in-law", Paula (Terry) Farrer, as well as her parents and brothers, Preston B. (Norma) Hoopes and W. Boyd Hoopes. She has 22 grandchildren, 46 great-grandchildren, 6 step great-grandchildren and 6 great-great-grandchildren. Mom, we love you so much! You have always been a wonderful example of love and service. Thank you for blessing our family in so many ways and for always being our #1 fan too. Funeral services will be held at 11:00 a.m. Thursday, July 7, 2016, at the Provo Peak 5th Ward Chapel, 965 N. Locust Lane (approximately 1300 East), Provo, Utah. There will be a viewing Wednesday evening, July 6, 2016, at the Berg Mortuary, 185 East Center Street, Provo, from 6:00 -8:00 p.m. and again on Thursday morning from 10:00-10:45 a.m. at the church. Interment will be at the Lehi City Cemetery. Condolences may be expressed online at www.bergmortuary.com.

Edna LaRue Hoopes Sims, 92, of Provo, passed away at her home surrounded by her loving children on Tuesday, June 28, 2016, of natural causes incident to age. LaRue was born on March 6, 1924, in Rexburg, Idaho, to George Albert and Edna Baker... View Obituary & Service Information

The family of LaRue Hoopes Sims created this Life Tributes page to make it easy to share your memories.

Edna LaRue Hoopes Sims, 92, of Provo, passed away at her home...

Send flowers to the Sims family.