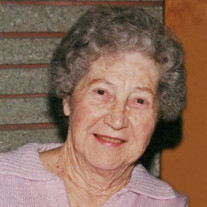 LaVerne Carter Peay Hancock (92) died of causes incident to age at her home in Provo on Sept. 18, 2020. She was born on Dec. 16, 1927, the third child of Vern Elmo Carter and Maud Pierce Carter in Provo Utah. She attended schools in Provo, graduating from Provo High School. She loved writing poetry, reading a good novel, was a whiz at crossword puzzles and inherited her dad's green thumb for gardening. She loved to grow her own tomatoes, cucumbers, beets and chard so she could have the foods she loved all winter. She was a member of The Church of Jesus Christ of Latter-day Saints. She held many positions including secretary, historian, librarian and counselor in the Relief Society as well as a visiting teacher for many years. She also did temple work for many deceased sisters. She married Lynn Elwin Peay on July 30, 1945. Together they had five children: Karen Louise Peay Snow (Dennis), Peggy Ann Peay Hughes, Christine Peay Skowron (Paul), Jackie Denise Peay and Robby Lynn Peay. They were later divorced. She married Rolland D. (Bill) Hancock on Jan. 28, 1992. Bill passed away on July 3, 2001. LaVerne is survived by her 4 daughters: Karen, Peggy, Chris and Jackie; one brother, Darwin Virl Carter (Clara); 11 grandchildren, 23 great-grandchildren, 4 great great grandchildren; and two step-children, Elaine Clark (Bert) and Larry Hancock (Sherry). She was preceded in death by her son, Robby and three brothers: Donald (who died in infancy), Garn V. Carter and Orvil Perry Carter; and two sisters, Helen Carter Boulton Zobell and Betty Jean Carter Johnson. The family would especially like to express their love and thanks to Kimberly Snow and Tracy Gardner (granddaughters) for all the love and care given to Mom. Also great appreciation to Carol and Marty Madsen, two angels, who devoted much time, work and love to our beloved mother. Mom would also want a special acknowledgment to her "doctor" of many years, Dr. Susan Chassen. Graveside services will be held on Wednesday, September 23, 2020 at 11:00 a.m. at the Provo City Cemetery, 610 South State Street, Provo, Utah. The family will receive friends on Tuesday, September 22, from 6-8:00 p.m. at the Berg Mortuary of Provo, 185 East Center Street. Condolences may be expressed to the family at www.bergmortuary.com.

LaVerne Carter Peay Hancock (92) died of causes incident to age at her home in Provo on Sept. 18, 2020. She was born on Dec. 16, 1927, the third child of Vern Elmo Carter and Maud Pierce Carter in Provo Utah. She attended schools in Provo, graduating... View Obituary & Service Information

The family of LaVerne Carter Peay Hancock created this Life Tributes page to make it easy to share your memories.

Send flowers to the Hancock family.