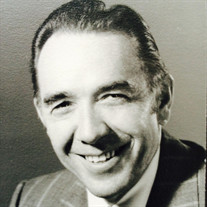 LaVon Soelberg Fife passed away April 9, 2015 at Courtyard at Jamestown Assisted Living in Provo. He was born May 23, 1924 in the farming community of Ammon, Idaho to Robert Lee and Zenobia Soelberg Fife. He had one older sister, Roine, and seven brothers, Leland, Reed, Marlyn, Lynn, Ronald, Merrill, and Allen. He grew up learning the value of hard work on the family farm. After graduating from high school, LaVon attended the University of Idaho in Moscow for one year, and then joined the Navy Reserve. He was called to active duty in June, 1943, and reported to Southwestern Louisiana Institute for officer training, followed by Midshipman’s School at Columbia University in New York, and Navy Gunnery school in Washington, D.C.. On January 1, 1945, he reported for duty on the USS St. Paul, serving as a Gunnery Officer on the heavy cruiser in the Pacific Theater. After the war, LaVon served a full time LDS mission in the East Central States Mission. While a missionary, he was a member of The Utah Centennial Quartet which toured throughout Virginia and North Carolina, singing over 500 concerts on the radio and in person to generate contacts for missionaries to teach. Upon his return, LaVon attended Utah State University, graduating in June, 1950 with a Bachelor’s of Science Degree in Agriculture. While there, he met and married Fawn Anderson of Fairview, Utah. They were married on June 23, 1950 in the Idaho Falls Temple. Their first son, Kelly was born in 1951 in Logan. He received his Master’s degree from USU in 1952. They then moved to Ithaca, New York to attend Cornell, where Lana was born in 1953. LaVon received his Ph.d in Agricultural Economics from Cornell in 1953. After brief stops in Indiana and Michigan, LaVon went to work for the International Harvester Company in Chicago as a Researcher and Market Forecaster in the Farm Equipment Division. The family settled in the Chicago area where they lived for 33 years while raising their five children. Kurt (1954), Leslie (1957), and Lori (1961) were born in the Midwest. LaVon was a faithful and active member of The Church of Jesus Christ of Latter-day Saints throughout his life. While in Chicago, he served as a Bishop, Counselor in the Stake Presidency, Stake Patriarch, and Counselor in the first presidency of the newly built Chicago Temple. In 1990, Fawn and LaVon retired to Provo to be near family. LaVon actively pursued many hobbies in retirement including gardening, painting, leather working, and music. He was active in Golden Kiwanis, serving a term as President. In the church, he served on the Stake High Council, worked as a sealer in the Provo Temple, and continued to serve as a Stake Patriarch. Fawn passed away in 2006, and in 2012 LaVon moved to the Jamestown Assisted Living facility in Provo. He became popular with residents and staff as he entertained everyone with his harmonica playing and cheerful disposition. LaVon leaves a legacy of integrity, service, hard work, strong faith, and good cheer. He endured well to the end. The family expresses appreciation to those who provided such good care to LaVon in his later years. LaVon was preceded in death by his wife, Fawn, his parents, his sister and brother-in-law, Roine and Jim Thorup, his brothers, Leland, Reed and Allen, and his sister-in-law, Dove. He is survived by his five children, Kelly (Nancy) Fife of Moorestown, NJ; Lana (Del) Jensen of Orem, UT; Kurt (Cynthia) Fife of Plainfield, IL; Leslie (Ed) Hunter of Peoria, AZ; and Lori (Gary) Pimentel of Salt Lake City, UT., as well as 19 beloved grandchildren and 26 great-grandchildren. He is also survived by four of his brothers: Marlyn (Eliza) Fife of Salt Lake City, UT; Lynn (Geniel) Fife of South Burlington, VT; Ronald (Faye) Fife of North Ogden, UT; Merrill (Maxine) Fife of Lindon, UT; and sisters-in-law Dorothy Fife of Washington, UT, and Joyce Fife of Pleasant Grove, UT., as well as many nieces and nephews. Funeral Services will be held Saturday, April 18 at 11:00 a.m. at the Slate Canyon Fourth Ward, 715 S. Utah Avenue., Provo. Friends may call at Berg Mortuary, 185 E. Center Street, Provo, on Friday, April 17 from 6-7:30 p.m. or at the church between 9:30 and 10:30 on Saturday. Burial will be at East Lawn Memorial Hills in Provo.

LaVon Soelberg Fife passed away April 9, 2015 at Courtyard at Jamestown Assisted Living in Provo. He was born May 23, 1924 in the farming community of Ammon, Idaho to Robert Lee and Zenobia Soelberg Fife. He had one older sister, Roine, and... View Obituary & Service Information

The family of LaVon Soelberg Fife created this Life Tributes page to make it easy to share your memories.

LaVon Soelberg Fife passed away April 9, 2015 at Courtyard at...

Send flowers to the Fife family.