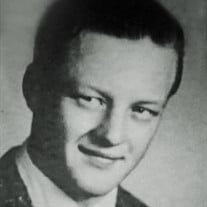 LaVoy Elmon Christensen passed away on January 7, 2016, in North Canyon Care Center in Bountiful, Utah, from causes incident to age. LaVoy was born April 16, 1943, in Salina, Utah, to Elmon F. and Elmeda Levie Christensen. He attended Aurora Elementary School and Pleasant Grove, Utah, Junior High and High School. He served an LDS mission to the Northwestern States and afterward enlisted in the Utah National Guard, serving as an infantry man. He married Veda Barrie in 1965 and had two sons. They were later divorced. He married Adell Trinnaman and had two more children. LaVoy work as tire salesman and later moved to Hiawatha, Utah, area where he worked and retired from the mining industry as an equipment mechanic and EMT. LaVoy is survived by his wife, Adell (Bountiful, Utah) and his four children, Ken (Salt Lake City); Barrie (Glendive, Montana); JoAnn and Bryant (Roundup, Montana) and nine grandchildren. Funeral services will be held at 11:00 a.m., Wednesday, January 13, 2016 at the Berg Drawing Room Chapel, 185 East Center Street, Provo, Utah. Friends may call from 9:30-10:45 prior to services. Interment, American Fork City Cemetery. The family wishes to thank the staff of dedicated caregivers at North Canyon Care Center for their kind and respectful care during the past few months. Condolences may be extended to the family at www.bergmortuary.com.

The family of LaVoy Elmon Christensen created this Life Tributes page to make it easy to share your memories.

LaVoy Elmon Christensen passed away on January 7, 2016, in North...