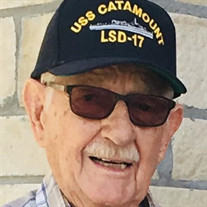 Lealand Jackson, 87, died on June 4, 2019, while in hospice care at The Sheridan at South Jordan, Utah. He was born on May 13, 1932, in Beaver, Utah, and was the youngest of eight children. Lealand spent his young life working alongside his siblings on the family dairy farm in Beaver, occasionally finding time to play with his beloved dog, Toby, and buying milkshakes in town with nickels he had saved. His family moved to Lakeview by the time he was nine, and it was at Lincoln High School in Orem where he and four of his closest buddies roamed the halls as the Lakeview Five. In between water skiing adventures, driving the roads of Provo in his 1936 Ford, and miscellaneous hijinks of which legends are made, Lealand found the love of his life, Carma Varley. In fact you can say they made beautiful music together as they both played in the high school band, Lealand on trumpet and Carma on the clarinet. After marrying Carma in 1953, Lealand enlisted in the US Navy, serving in the Korean War. He and Carma worked hard while raising a family, moving from Utah to Oregon and eventually setting in Louisa, Virginia, where they lived for 48 years. Driven by his work ethic and his innate ability to fix anything, he ran his own successful painting business, restored a 1936 Ford, invented the sport of lawn-surfing (which involved dragging a wooden board covered with squealing grandchildren behind a riding lawn mower), and perfected his Sunday morning breakfast ritual complete with his special cheese eggs and bacon. Lee loved making people laugh−he had a joke for every occasion and enjoyed teasing the grandkids. Lealand and Carma returned to Utah in 2018, residing at the The Sheridan at South Jordan, a senior care facility. Lealand is survived by his wife of 65 years, Carma Varley Jackson; their five children, Cheryl (Dennis) McCleary, Jeanne (Brad) Smeath, Julie (Robbie) Reed, Bill (Jennifer) Jackson, and Terri Jackson; 14 grandchildren, and 11 great-grandchildren. Graveside services will be held at 2:00 p.m., Friday, June 7, 2019 at the Provo City Cemetery, 610 South State Street, Provo, Utah. Friends may visit with the family at the Berg Mortuary of Provo, 185 East Center Street, from 1-1:45 p.m. prior to services at the cemetery. Condolences may be expressed to the family at www.bergmortuary.com. The family wishes to extend their love and appreciation to the caring, supportive staff of The Sheridan at South Jordan and to Berg Mortuary.

Lealand Jackson, 87, died on June 4, 2019, while in hospice care at The Sheridan at South Jordan, Utah. He was born on May 13, 1932, in Beaver, Utah, and was the youngest of eight children. Lealand spent his young life working alongside his... View Obituary & Service Information

The family of Lealand Jackson created this Life Tributes page to make it easy to share your memories.