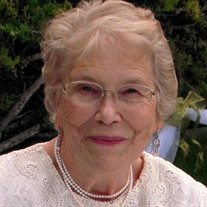 Lela Davis Stott was born May 29, 1928 in Provo, Utah to Dell B. Davis and Julia Rachel Olsen. The hills around her childhood home were covered in sage brush, oak trees and many kinds of flowers. As a child, Lela and her sister would collect a variety of flowers to take to their mother. There were many Davis children, all cousins that lived in Provo at that time. They loved getting together in the winter to play in the snow and get together in the summer for picnics and good times. Life was good back then. They didn’t have many conveniences growing up but no one felt poor, as everyone was in the same situation. Lela graduated from Lincoln High School and L.D.S. Seminary. She attended Central Utah Vocational School and then went to B.Y.U. She married her sweetheart, Melvin H. Stott, on September 4, 1947 in the Manti Temple. Melvin built their first home. They raised a big garden and had many fruit trees. Lela was a stay-at-home mother and her talents included homemaking, cooking, sewing, making homemade bread, canning and lovingly raising their seven children. Her children and grandchildren were her pride and joy! She also loved doing her family history and her children are feeling blessed for the work she has done. Lela is preceded in death by her husband, Melvin H. Stott, parents, Dell B. and Julia Rachel Davis, sister, Dora Davis, and brother, Wayne B. Davis. She is survived by her brother, Eugene O. Davis and her children, June Hakanson (Dennis), Connie Hunter (Alan), Sue Blount (Jim), Ross D. Stott, Debby Morgan (Ray), Heather Graham (Michael), and Jason Stott (Tiffany). She has 27 grandchildren and 49 great-grandchildren. Funeral services will be held at 11:00 a.m., Friday, November 8, 2019 at the Edgemont 21st Ward Chapel, 2900 North 650 East (Timpview Drive), Provo, Utah. Friends may visit with the family from 9:30-10:45 a.m. prior to services. Interment to follow at Provo City Cemetery, 610 S. State Street, Provo. Condolences may be expressed to the family at www.bergmortuary.com.

Lela Davis Stott was born May 29, 1928 in Provo, Utah to Dell B. Davis and Julia Rachel Olsen. The hills around her childhood home were covered in sage brush, oak trees and many kinds of flowers. As a child, Lela and her sister would collect... View Obituary & Service Information

The family of Lela Davis Stott created this Life Tributes page to make it easy to share your memories.

Send flowers to the Stott family.