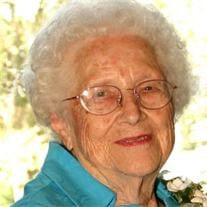 Leona Esther Daniels Brown Hansen, age 97, passed away on December 5, 2012 in Orem, Utah. She was born in Farr West, Weber, Utah on August 11, 1915 to Almon Dell Daniels and Eva Francilda Geddes Brown. She graduated from Ogden High School and attended Utah State Agricultural College (now Utah State University) in Logan, Utah. On September 17, 1937 she married Wayne Hansen in the Salt Lake Temple. They had 4 children: James Wayne, Paul Brown, Norma (who died in infancy), and Faye. Leona lived in Northern California (mostly near Modesto) for 65 years, and moved to Orem in 2003 until passing. She was an active member of The Church of Jesus Christ of Latter-day Saints and served in many capacities including Modesto California Stake Relief Society President and as an ordinance worker in the Oakland California Temple. She and Wayne served a full time mission as representatives of the Church in Israel. Leona loved sewing, quilting, serving, and supporting her husband and family. She is survived by her children: James (Karen) Hansen, South Jordan, Utah, Paul (Judy) Hansen, Fresno, California, and Faye (Bryon) Pinkston, Eugene, Oregon; 19 grandchildren; 64 great-grandchildren; and 1 great-great-granddaughter. She was preceded in death by her husband, Wayne Hansen; brothers Almon Daniels Brown, Harold Daniels Brown, Geddes Daniels Brown, Clarence Daniels Brown, and Roland Daniels Brown; and sister Thelma Daniels Brown Holmes. The family would like to thank Siale Vaka for her care and service the past three years. Funeral services will be held at 11:00 a.m., Monday, December 10, 2012 at the LDS Church, 114 S. 400 W., Orem, Utah. Friends may attend a viewing at the church Monday from 9:30-10:40 a.m. prior to services. For those interested in attending the dedication of the grave, interment will be by the side of her husband at Lakewood Memorial Park in Hughson, California at 10:00 a.m. on Wednesday, December 12. Condolences to the family may be sent through this obituary at www.bergmortuary.com.

The family of Leona Daniels Brown Hansen created this Life Tributes page to make it easy to share your memories.