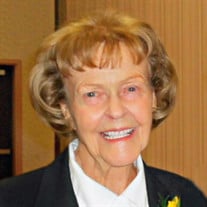 Leona Amy Holder Jones, who graced this mortal existence for 93 beautiful years, passed on October 3, 2016 at her home in Mapleton, Utah. Leona was born on February 13, 1923 in Sunnyside, Utah, a company mining camp near Price. She was the youngest daughter of William John Holder and Florence Agnes Strong Holder. She had three siblings who died in infancy and whom she is now meeting for the first time. She was preceded in death by her other siblings: Virginia Brown, Marie Hutchings, and Robert Holder. One of her greatest sorrows in life was the death of her eldest son Daniel John Jones less than one year ago. She married Carl Daniels Jones on November 16, 1942. They spent only two weeks of married life together before parting for two years, while Carl fought in WWII. They shared 56 richly rewarding years, many of which were serving as foreign mission parents over several missions and setting up the England Missionary Training Center. These were among many of the services given in love to the Church and to beloved friends. Leona graduated from Provo High School, attended LDS Business College, and completed several years of study at BYU. Many years before women received approval for working outside the home, Leona bravely chose to professionally apply her business skills, eventually being promoted to the executive secretary of the project manager for the Glen Canyon Dam. Family vacations often included trips to see how the dam was progressing. She would tell you, however, that her real profession was being a Wife, Mother, and Grandmother. She proudly displayed her posterity in the hallway of her home. She also served as a loving sage who challenged everyone she knew to be better. Leona is survived by her two sons, Robert D. Jones and Walter C. Jones, and daughters-in-law, Sheryl H. Jones (Daniel's wife), Jennie P. Jones (Robert's wife) and Vickie S. Jones (Walter's wife). Additional survivors include 20 grandchildren, 57 great-grandchildren and 16 great-great-grandchildren. Funeral services will be held at 11:00 a.m., Saturday, October 8, 2016 at the Mapleton 6th Ward Chapel, 1580 North Main Street, Mapleton, Utah. Friends may call at the Berg Mortuary of Provo, 185 East Center Street, Friday, October 7, from 6-8:00 p.m. and at the church Saturday, from 9:30-10:30 a.m. prior to services. Interment, Provo City Cemetery. Condolences may be expressed to the family at www.bergmortuary.com.

Leona Amy Holder Jones, who graced this mortal existence for 93 beautiful years, passed on October 3, 2016 at her home in Mapleton, Utah. Leona was born on February 13, 1923 in Sunnyside, Utah, a company mining camp near Price. She was the... View Obituary & Service Information

The family of Leona Amy Holder Jones created this Life Tributes page to make it easy to share your memories.

Leona Amy Holder Jones, who graced this mortal existence for...