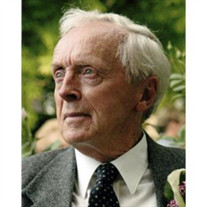 LeRoy Petersen, 91, passed away peacefully on December 13, 2020, due to complications of age, in the company of his three children. LeRoy was born in Provo, Utah, on January 23, 1929 to Preston and Christine Petersen. He grew up with five brothers (Clint, Bud, Reed, Glen and Blaine) and one sister (Margie) who all preceded him in death. LeRoy attended Provo City Schools and graduated from Provo High in 1947. In August of 1948, he and a friend enlisted in the navy for two years. He served on the USS Ashtabula in the Pacific. He left his sweetheart, Carolyn Jarvis, at home waiting for him. After returning from the service, he married Carolyn Jarvis in the Salt Lake Temple, and they had three children, Diane, Bob and Kaye. He also then returned to his job at Geneva Steel, where he retired after 39 years. LeRoy was an accomplished left-handed golfer, competing successfully in area tournaments. He competed in the National Left-Handers Golf Tournament for two consecutive years. He was also a very disciplined and successful runner, competing and finishing 21 marathons. His PR was at the St. George Marathon in 1982, with a time of 2:50:59, at the age of 53. He made many life-long friends in the running community. He also loved hunting ducks, geese, and pheasants with his black labs, Spike and Duke and with family members. LeRoy was an active member of The Church of Jesus Christ of Latter-day Saints and served as financial clerk for many years. He always said that calling was his favorite. LeRoy was a very kind, generous and loving Grandpa. He loved seeing and visiting with his grandkids and great-grandkids right up to his passing. He looked forward to and enjoyed the window visits he was able to have with the kids during the last couple of months. Also, he thoroughly enjoyed (contrary to what he may have said) going to Disneyland with Carolyn and their kids and grandkids! Carolyn passed away on August 11, 2007. For the next 13 years, one of Dad’s greatest sources of enjoyment was to “jump” in his car and take a “little drive” around southwest Provo numerous times each day. Occasionally, he would venture further from home, much to the dismay of his children. LeRoy is survived by his three children, Diane (Kent) Huff of Orem, Bob (Holly) of Orem, and Kaye (Tom) Christensen of Elk Ridge. He is also survived by eight grandchildren, Erin, Matt, Branick, Kyle, Colton, Cole, Maddie Jo, and Zane, and his fourteen great-grandchildren. Grandpa LeRoy was loved dearly by the family and will be very, very missed. Love you Dad! Love you, Grandpa!! As a family, we would like to express our sincere appreciation to all who were so good to Dad over the last eight months. Their genuine compassion and concern for Dad, especially under the current conditions, was a great blessing to Dad and to our family. We would like to thank the staffs of Aspen Ridge of Utah Valley, Health Watch, BRiO Utah, and Courtyard at Jamestown. Due to the pandemic, we have chosen to have a small private family service to honor our Dad, Grandpa, and Great-Grandpa. Condolences may be expressed at www.bergmortuary.com.

LeRoy Petersen, 91, passed away peacefully on December 13, 2020, due to complications of age, in the company of his three children. LeRoy was born in Provo, Utah, on January 23, 1929 to Preston and Christine Petersen. He grew up with five brothers... View Obituary & Service Information

The family of LeRoy Petersen created this Life Tributes page to make it easy to share your memories.