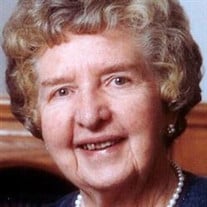 Lila was the child of Samuel and Barbara Francis. She was born in an adobe house located about 2 miles west of "Center" in Lake Shore, Utah County. When she was 18 months old, the family moved into a two-room frame house on West Mountain on land her father cleared. She met Milo Madsen when she saw him perform in a comedy routine, where he stepped in a bucket. This was apparently so well done and so hilarious that she fell in love with him immediately. She and Milo were married in 1939. The couple moved around a bit before settling down on Hartford Street in Salt Lake City, where they would spend the next 43 years. There they raised their five sons and welcomed numerous grandchildren and great-grandchildren. Lila was known around the neighborhood for her homemade bread and her “deer hunting” cookies. Her 15 minutes of fame came appearing on the TV show “Queen For A Day” and having her famous enchilada recipe published in The Salt Lake Tribune. Her grandchildren and great-grandchildren loved visiting, eating fresh fruit from her garden and her famous homemade Oreos, playing the invented card game “No Peeky,” and going on epic adventures in her trailer. Later in life Lila loved to travel, and she and Milo made several exciting journeys, documenting each one for the Photochrome club along the way. She served extensively in the LDS church, eventually serving a mission at Temple Square. Age and ill health forced Lila and Milo to leave their beloved Hartford Street house to be closer to family in Orem. Milo passed away in 2003, and Lila soon moved to The Courtyard at Jamestown, where they took excellent care of her in her last years. The family sends special thanks to Wendy and the team at Inspiration Hospice for making her as comfortable as possible, and special thanks to her sister, Carol Loveless, whose love and constant regular visits brightened Lila’s last days. Lila was preceded in death by her beloved Milo, her son Grant, and two grandsons. She is survived by her sons Larry (Rod Wessel), Max (Sue Noorda), Clyde (Janet Harmon), and Von (Marianne Moss); her daughter-in-law LaRille Bushman; 14 grandchildren; 49 great-grandchildren and 33 great-great-grandchildren. You read that right—she lived long enough to see her grandchildren’s grandchildren. Funeral services will be held on Wednesday, February 24, 2016 at 11:00 a.m. at the Berg Mortuary of Orem, 500 North State Street. Friends may call at the mortuary on Wednesday morning from 9:30 until 10:50. Interment will be in the Orem City Cemetery. Condolences may be sent to the family through www.bergmortuary.com. In lieu of flowers, please donate in Lila’s memory in recognition of all her Relief Society service to the LDS Church’s Humanitarian Services Aid fund at https://www.ldsphilanthropies.org/donations/lds-church/humanitarian-services.html.

Lila was the child of Samuel and Barbara Francis. She was born in an adobe house located about 2 miles west of "Center" in Lake Shore, Utah County. When she was 18 months old, the family moved into a two-room frame house on West Mountain on... View Obituary & Service Information

The family of Lila Francis Madsen created this Life Tributes page to make it easy to share your memories.

Lila was the child of Samuel and Barbara Francis. She was born...