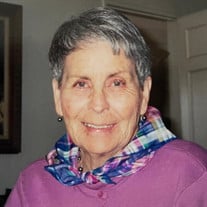 Lillian Young Hayes passed away peacefully at 102 years old on May 1, 2022, surrounded by her family in the home of her daughter, Bonnie Callis, the historic Dallas H Young home on Center Street in Provo, Utah. She enjoyed good health right up to the end, taking daily walks around the block with her daughter and caregiver, Bonnie Callis and her son, Richard. Lillian was born in Roosevelt, Utah on January 21, 1920, to Elsie Lucile Brady and Dallas Huber Young. Dallas took Lucile from their homestead cabin in Antelope Canyon to Roosevelt where, due to the influenza pandemic of 1918-1920, it was not safe to go to the hospital, so they went upstairs above the Rexall Drug building on Main Street. There, Dallas built a fire in the stove, and Lily was born. When she was 4 years old, Lily’s family moved to Salt Lake City where her father attended law school at the University of Utah, and Lillian attended Stewart School. After graduating with honors, Dallas moved his family to Vernal where he set up a law practice and was appointed Uintah County Attorney in 1926. Together, Lucile and Dallas raised 5 children: Miriam, Lillian, LeGrande, Dallas Jr., and Molly. Lillian attended public schools in Vernal until 1936 when Dallas was elected judge of the Fourth Judicial District and moved his family to Provo, where Lillian graduated from Provo High School. Lillian attended BYU business school and was employed as a secretary at the United States Steel Ironton plant south of Provo. There she met Keith Hayes, a mining engineer for US Steel. When World War II broke out, Keith, a U of U ROTC graduate, was commissioned as a Lieutenant and served from 1941-1945. Lillian traveled to San Francisco and was employed as a secretary for the war effort. They corresponded during the war and when the war ended, she returned to Provo and she and Keith were married in 1946. Keith continued in the Army Reserves and retired as a Lieutenant Colonel. They bought their first home in Payson, Utah, where they began their family, then moved to Provo in 1953 where they raised their 6 children. The entire family were avid skiers, and Lily encouraged and supported them in this endeavor; all 6 children competed in or instructed skiing. Lily was a homemaker and was active in the Maeser School PTA where she advocated for planting grass and trees to improve the playground and other facilities for the students. She always made the neighborhood children feel welcome to play in the yard at their home. Keith and Lillian took innumerable field trips into wild places and sites of geologic and historic interest with family, cousins and friends. The many offroad Jeep outings were a special treat. Her husband John Keith Hayes died in 2004 at almost 88 years of age. They were married for 58 years. Lillian cared deeply about local environmental issues and wanted to make a difference in protecting land, animal and plant habitat. Of particular concern to her was protecting the natural water springs in Provo Canyon and the wetlands surrounding Utah Lake. She put extraordinary time, effort, research and communication into fighting significant environmental issues to protect the watersheds and wildlife. She organized people, solicited support, gathered experts to inform and persuade decision makers. We can all be grateful for her successful defiance of the Utah Highway Department’s initial design to pave over Provo Canyon springs. She served as president of the Timpanogos Audubon Society and was active in politics, serving as a precinct chairwoman for the Democrat party as well as was a member of the ACLU, League of Women Voters, Friends of Great Salt Lake, Save Our Canyons and many other civic groups. She encouraged people to take interest in their local government affairs. She received the UVU Environmental Ethics Award in 2001, the Stella Welsh award from the Democratic Women of Utah County in November, 2013, and a Trailblazer Women Award from Provo City on March 7, 2020. A skilled bridge player, Lillian gathered often with her siblings, Keith, and friends for a good game of cards. She played in local bridge groups into her 90s. Lillian is survived by 6 children, 26 grandchildren and 37 great grandchildren. She is predeceased by her parents, siblings, and an infant son, James Peter, who died in childbirth. Her children are Margaret Ann (Meg) Guinn Allen, Geraldine Lasater, John Keith, Jr. (Andy Clark), Frederick Samson (Danny Rill McCombs), Bonnie Hayes Callis (Charles), and Richard Young. In lieu of flowers, please send donations to your favorite conservation and human rights causes or the John Keith and Lillian Y. Hayes Endowed Scholarship in Geology at UVU. Funeral services will be held at 11:00 a.m., Saturday, May 14, 2022 at the Berg Drawing Room Chapel, 185 E Center St, Provo, Utah. Friends may visit with the family at the mortuary Friday, May 13, from 6-8:00 p.m. and Saturday, from 9:30-10:50 a.m. prior to services. Interment will follow at the Pleasant Grove City Cemetery, 500 N Main St, Pleasant Grove. Condolences may be expressed to the family at www.bergmortuary.com. Funeral services can be viewed live or after the service at: https://webcasts.lifetributes.com/1209369

Lillian Young Hayes passed away peacefully at 102 years old on May 1, 2022, surrounded by her family in the home of her daughter, Bonnie Callis, the historic Dallas H Young home on Center Street in Provo, Utah. She enjoyed good health right... View Obituary & Service Information

The family of Lillian Young Hayes created this Life Tributes page to make it easy to share your memories.

Lillian Young Hayes passed away peacefully at 102 years old on...

Send flowers to the Hayes family.